I was just watching a film“UN death camps in Kosovo April 2009” about protest which was hold by Roma children living in UN camps in North Mitrovica, Kosovo. The protesters however were still living, so far 81 has already dead after ten years suffering in United Nations Camps for Internally Displaced Persons (IDPs), living in place which is described the most toxic site in Eastern Europe. Their story gives another perspective related to “humanitarian intervention” implemented by Nato and to international administration implemented afterwards and backed with billions of Euros EU financing. And this is happening in Europe and in this millennium.

The children hold a protest vigil on International Roma Day. In the protest, their banners proclaimed “God Save Us from UNHCR” and”Welcome to Kouchner’s Hell”, reminding Bernard Kouchner – then Special Representative of the UN Secretary General (SRSG), now FM of France – about his promise autumn 1999 to move families immediately from toxic camp.

“The place where the camps are, the UN had a plan to build a fence around it and say, ‘danger.’ But they didn’t do that. Instead they put the Roma there.” (U.N. toxic Shame)

While Nato troops arrived to Kosovo – for “humanitarian intervention” – on June 1999 their Kosovo Albanian allies started their revenge not only against Serbs but also against the Roma which the Albanians accused of collaborating with Serbs. The largest Roma, Ashkali and Egyptians (RAE) community was in south Mitrovica. They were forced to move over Ibar river to Serb dominated north Mitrovica.

Under international administration those displaced families were placed in camps located heavily polluted mining and smelter complex. The international administration know that camps were in dangerously toxic environment, the experts and non-governmental organizations demanded immediate evacuation for Roma families, however after nearly ten years – in post-war Kosovo, 200 km from the European Union’s borders – these families still are trapped in camps slowly dying from lead poisoning.

To get live picture about case I can recommend an excellent documentary film “Trapped – The forgotten story of Mitrovica Roma” by Katalin Barsony/Duna Television/Hungary which can be watched from here!

A summary of main events related to Mitrovica Roma case is in insert below. As source I have used a Chronology prepared by KMEG (The Kosovo Medical Emergency Group) –group of advocates with goal to achieve immediate evacuation and medical treatment for families abandoned in toxic camps in north Kosovo. (The Chronology and other KMEG material can be found from here)

1999: June 16 After NATO troops arrived in Kosovo, black uniformed KLA (Kosovo Liberation Army) soldiers begin visiting homes in the Romani (Gypsy) settlement (mahalla) of Fabri?ka in south Mitrovicë/Mitrovica, largest Roma, Ashkali, and Egyptian (RAE) community in Kosovo, with about 1,000 families comprising about 8,000 people. The RAE families are told that Kosovo is only for Albanians and the RAE must leave if they want to save their families. Over the next three months, many RAE families lock up their homes and move across the Ibar River into north Mitrovicë/Mitrovica. But accommodation is unavailable as thousands of Serbs also flee from Albanian nationalists.

1999: August Paul Polansky, an adviser to the United Nations High Commissioner for Refugees (UNHCR) on Romani issues, visits the Fabri?ka neighbourhood to assess the situation. He finds Albanians looting many of the abandoned homes. He asks French NATO troops in the area to intervene. Their Commanding Officer (CO) replies that they are not a police force, and that their mandate is only to protect Albanians from the local Serbs.

1999: September Baroness Nicholson meets Bernard Kouchner, Special Representative of the UN Secretary General (SRSG) at camps when he stated the families would be moved immediately.

1999: End of September UNHCR is renting a plot of land from abandoned lead mining site where the IDPs can be housed in tents until UNHCR can find a permanent solution for these 800 vulnerable inhabitants. According UNHCR this is a temporary solution for only 45 days. Also head of UNMIK (SRSG) Dr. Bernard Kouchner (founder of Medecins San Frontieres, and currently the Foreign Minister of France) personally assures that the camp will be closed within 45 days and the inhabitantsresettled elsewhere.

2000: Summer/Fall SRSG Dr. Bernard Kouchner orders his UN medical team to make an investigation of the lead pollution in the entire Mitrovicë/Mitrovica area. French army doctors have reported several cases of lead poisoning in their soldiers who are quartered in an old Serbian army base 100 meters from the IDP camp at ?esmin Lug/Çesmin Llug.

2000: November Dr. Andreyew submits his written report to Dr. Kouchner, head of UNMIK and a report to the World Health Organization (WHO), recommending evacuation of the RAE camps and fencing off the land so that the public cannot accidentally enter. His investigation shows that the entire population of Mitrovicë/Mitrovica is suffering from unhealthy levels of lead poisoning. However, the highest levels (three to four times higher than the average in Mitrovicë/Mitrovica) were found in the children in the IDP camps of Çesmin Llug/?esmin Lug and Zhitkovc/Žitkovac. Dr. Andreyew’s report, which UNMIK refused to release to the public, was never acted upon, with one exception: several international UNMIK police officers were tested, since they jogged daily on a path by the slag heaps near the ?esmin Lug/Çesmin Llug camp. Their lead levels were so high that UNMIK immediately repatriated them since lead poisoning cannot be treated at the source of poisoning without causing dangerous complications.

2002 UNHCR shelves all of its plans to resettle the camp Roma abroad. UNHCR contracts ACT (Action by Churches Working Together) office in Prishtinë/Priština to build barracks on the same toxic land in Zhitkovc/Žitkovac, replacing the tents.

2004: March/April After the investigation prompted by the death of Djenita Mehmeti, and the compiling of the information from the blood lead level (BLL) results, WHO Pristinë/Priština sends a letter to UNMIK calling for an immediate evacuation of the UN camps. UNMIK refuses, claiming that they have no place to take 500 Gypsies. UNMIK pleads lack of resources to tackle the problem.

2004: November pregnancies and more than 50 have miscarriages. ICRC sends a letter to UNMIK demanding immediate evacuation of the camps. UNMIK refuses.

2005 A staff member of WHO, upset by UNMIK’s and WHO’s apparent cover-up of the tragedy, asks Paul Polansky to let the world know what is happening. Polansky publishes an opinion piece in the International Herald Tribune about the plight in these UN camps. Though several other journalists pick up the story, UNMIK authorities still refuse to evacuate the camps. He also asks European Roma Rights Center (ERRC) to file a lawsuit in the European Court of Human Rights (ECtHR), Strasbourg against UNMIK. The Human Rights Court in Strasbourg rejects the lawsuit saying that only a country, not an organization, can be sued.

2006 Finally admitting that the camps are located on highly toxic waste, UNMIK decides to bow to international pressure and take some steps to try to convince the public they are dealing with the lead pollution.

2008 An international advocacy group, known as the Kosovo Medical Emergency Group(KMEG), is formed to publicize the plight of the IDPs in the UN camps. The group– whose purpose is to push for an immediate medical evacuation – begins a press campaign and makes public the report from 2000, as well as all blood tests from 2004 to 2008 which WHO and UNMIK have refused to share with even the families in the camps. treat the more than 500 IDPs.

On 12 May, 2008, UNMIK officially turns over the three camps (Osterode camp, ?esmin Lug/Çesmin Llug and Leposaviq/Leposavi?) to the Kosovo government. As the year ends, it is noted that 78 RAE had died in the camps since Nov 1999, their lives foreshortened by the severe damage caused to their health by toxic conditions in the camps.

On January 22nd 2009 European Parliament highlights Roma camp case in its “EU resolution Kosovo” as follows: (EP) Is gravely concerned at the acute ill health of Roma families in the Osterode and Cesmin Lug refugee camps; believes that these are directly linked to the improper siting of those camps which find themselves on the highly toxic tailing stands of the Trepça lead mines; welcomes the Commission’s initial engagement with the Kosovo government and urges the Commission to continue to work with a view to relocating urgently the families concerned;

2009 April 81 deaths so far, the Kosovo government who took over responsibility on 2008, have not yet even visited the camps. 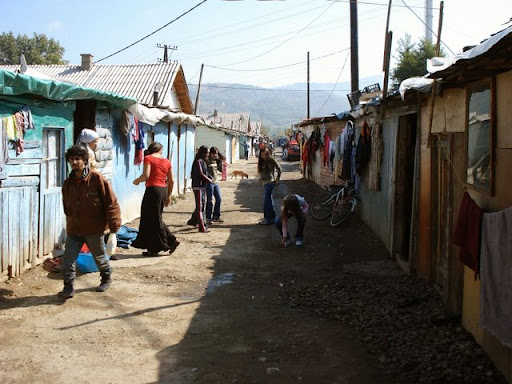 When I visited in those northern Mitrovica camps during 2000-2002 the risks about lead poisoning was well known. Also we who lived in normal conditions in region were got some instructions to exercise some caution. Already then there were plans to cure circumstances but nothing happened. I hardly have imagination how it is possible to still have same problems.

This should not had been happen – not during and after “humanitarian intervention”, not during post-conflict capacity building and after billions of EU taxpayers money put to development projects, not in Europe 200 km from EU border, not in international protectorate with “European perspective”.

EU’s most ambitious rule of law mission – Eulex – has been operating in Kosovo already nearly one year. I must ask if human rights have any priority in mission or is the aim only to train local police to write traffic tickets correctly. EU Commissioner Rehn said in his letter 17.02.2009 to MEP Gay Mitchell, that funding is not primary problem but complicated political side. When EU has funds and other resources ready to implement actions plus huge rule of law mission on the ground I really wonder why actions are not taken immediatelly. 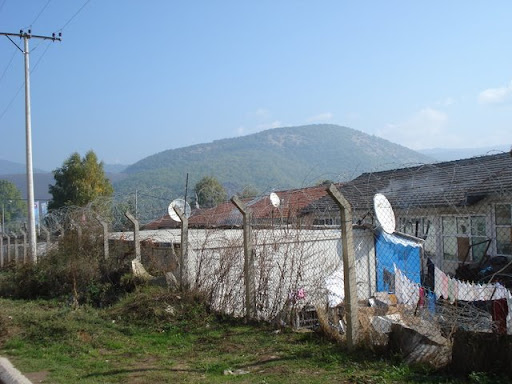 From my point of view at least following steps should be taken to correct situation and to prevent it happen again:

1) According international law (UN Security Council resolution 1244) Kosovo still is international protectorate. As officially highest authority is UNMIK so it could make immediate decision t evacuate camps and transfer Roma families from them to get medical treatment elsewhere. The other international actors – Eulex, Kfor, ICO (International Community Office)/EU Special representative and EU delegation could help to implement this immediate action.

2) For long term solution international – and donor – community should plan together with local representatives resettlement/housing program for Roma families.

4) To increase responsibility in future missions the persons/organisations who have enabled situation described earlier should be put in international court charged about human rights violations, crimes against humanity, involuntary manslaughter and covering up the case (stupidity, laziness and incapability are probably not crimes but could be non-qualifying skills in future recruitments).

Roma families in Kosovo are people left in deathly camps years after a conflict. These are not only displaced, but their displacement happened while western nations, whose duty it was to protect them, stood by. Inactive at the scene, international administration subsequently placed them in a dangerously toxic environment, and for years thereafter effectively ignored their plight covering same time own mistakes. EU’s speciality has been “soft power”, taking responsibility, initiative and leadership now could at least limit the damages in Roma camps in Kosovo and hopefully elsewhere afterwards. 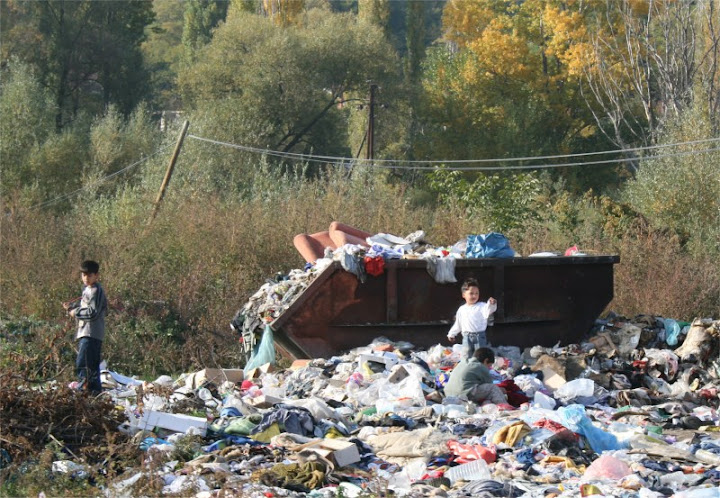