Yemen – the next target for the War on Terror?

“Somebody in our government said to me in Sana’a, the capital of Yemen, Iraq was yesterday’s war. Afghanistan is today’s war. If we don’t act pre-emptively, Yemen will be tomorrow’s war.” (Sen. Joseph Lieberman, I-Conn.)

On December 25 US authorities arrested a Nigerian named Abdulmutallab aboard a Northwest Airlines flight from to on charges of having tried to blow up the plane with smuggled explosives. He was “suspected” of having been trained in for his terror mission in Yemen. A new target for the “War on Terror” has been found. Is it really so that a guy who burnt his trousers with some powder hidden there has so big influence to geopolitics – I have some doubts. More than from trousers of this desperate Nigerian wannabe terrorist the hidden agenda may be found again from great energy game and from interests of military-industrial complex.

Yemen has a population 23.8 million is located at the tip of the Arabian Peninsula , bordered by Saudi Arabia to the north, Oman to the east, Red Sea to the west and Gulf of Aden to the south. It is one of the poorest countries in the Arab world. Per capita GDP estimated at $2,500; 45% live below the poverty line, and 35% are unemployed. The Republic of Yemen was created in 1990 when North and South Yemen united. President is Ali Abdallah Saleh became the first elected President in reunified Yemen in 1999 (though he had been President of unified Yemen since 1990 and President of North Yemen since 1978). 53% of the Muslim population is Sunni and 47% is Shi’a. Among Yemen’s natural and cultural attractions are four World Heritage sites.

Yemen’s southern provinces have recently been the scene of US air strikes which Washington claims to be aimed at uprooting an al-Qaeda cell operative in the Persian Gulf state. But the residents of the area dismiss the claims that al-Qaeda members are being targeted in the US-sponsored air strikes, while Yemen’s government says the strike targeted militants and their relatives.

The Yemen-based group, which claims to be affiliated with Osama bin Laden’s organisation, had earlier claimed responsibility for the failed attack and called for strikes on embassies in Yemen.

The US operation in southern Yemen comes on top of a joint Saudi-Yemeni military campaign in the country’s war-weary north where Sana’a and Riyadh forces are engaged in a fierce fighting against the Houthi fighters. The Houthis, who accuse the Sunni-dominated Sana’a government of discrimination and repression against Yemen’s Shia minority, were the target of the army’s off and on attacks before the central government launched an all-out fighting against them in early August. Saudi Arabia joined the operation later following alleged clashes between its border guards and the Houthis, carrying out regular air strikes and ground incursions against the fighters.

One presumption is that US has gave the Saudis a green light to militarily intervene in Yemen to defend the Sunnis against Shias. It remains to see if this outsourcing of US foreign policy to the Saudis is enough or will escalation occur.

The actual reason for planned U.S. involvement can be the fact that the U.S.-backed dictator, Yemen’s President Saleh, increasingly is losing control after two decades as despotic ruler of the unified Yemen. Economic conditions in the country took a drastic downward slide in 2008 when world oil prices collapsed. Some 70% of the state revenues derive from Yemen’s oil sales. The central government of Saleh sits in former North Yemen in Sana’a, while the oil is in former South Yemen. Yet Saleh controls the oil revenue flows. Lack of oil revenue has made Saleh’s usual option of buying off opposition groups all but impossible. The government has little control outside the capital, leaving a power vacuum in large swaths of the mountainous, impoverished nations.

The U.S. Government Energy Information Agency states that “closure of the Bab el-Mandab could keep tankers from the Persian Gulf from reaching the Suez Canal/Sumed pipeline complex, diverting them around the southern tip of Africa. The Strait of Bab el-Mandab is a chokepoint between the horn of Africa and the Middle East, and a strategic link between the Mediterranean Sea and Indian Ocean.”

In addition to its geopolitical position as a major global oil transit chokepoint, Yemen is reported to hold some of the world’s greatest untapped oil reserves. Yemen’s Masila Basin and Shabwa Basin are reported by international oil companies to contain “world class discoveries.”

“In the councils of government, we must guard against the acquisition of unwarranted influence, whether sought or unsought, by the military industrial complex. The potential for the disastrous rise of misplaced power exists and will persist.” (Dwight Eisenhower)

The same forces that steered the Bush Administration still seem alive and well today. The Military-Industrial-Complex (MIC) has its decisive say in U.S. foreign policy. Why so? The explanation can be found from picture above describing spending in U.S. federal budget.

The military industry is a dominant player in the US economy. Military orders drive America’s manufacturing sector. More than one-third of all engineers and scientists in the US are engaged in military-related jobs. Several sections of the country and a number of industrial sectors, particularly shipbuilding and aerospace, are greatly dependent upon military spending or foreign arms sales. The Department of Defense (DoD), together with the top defense corporations – or what is known as the “military-industrial complex” – controls the largest coordinated bloc of industry in the US. Roughly 75% of federal research and development expenditure is devoted to military projects.

While military contractors are looking for new markets, the Pentagon is seeking a new mission. Pentagon and U.S. intelligence are moving to militarize a strategic chokepoint for the world’s oil flows, Bab el-Mandab. The Somalia piracy incident, together with claims of a new Al Qaeda threat arising from Yemen, are serving as good excuse to this campaign. Citing an unnamed former top CIA official, the New York Times wrote that a year ago the Central Intelligence Agency sent many field operatives with counterterrorism experience to the country. At the same time, some of the most secretive special operations commandos have begun training Yemeni security forces in counter-terrorism tactics, the report said. The Pentagon will be spending more than 70 million dollars over the next 18 months, and using teams of special forces, to train and equip Yemeni military, Interior Ministry and coast guard forces, more than doubling previous military aid levels, the paper noted.

Without doubt, the military-industrial complex has a stake in expanding areas to be exploited for oil as well as protecting U.S. oil sources. This is good news to the weapons industry. While many sectors in the US are suffering from the economic crunch, top weapons manufacturers are awaiting new orders, hiring new people, looking for new investments and gaining attention on the stock market. Political connections are also helpful in ensuring business and creating new markets. This connection helped influence overthrows of several foreign governments perceived as unfriendly to American business. It also allowed the companies to be at the right place at the right time to take advantage of new business opportunities with puppet regimes.

Military Industrial Complex is much more than only developing, producing and marketing weapons. One part is hired guns – private armies – like DynCorp and Xe (formerly Blackwater USA) costing tens of billions of dollars in Iraq and Afghanistan. Lack of oversight so scandalous that rampant waste, fraud, and abuse plus war crimes go unmonitored. While U.S. troops are implementing COIN strategy in Afghanistan these companies like the infamous Blackwater, now called Xe, are at work for the CIA, which is spearheading the covert Pakistan war, and this all costs money, big money. Fortunately, the agency still has the opium crop to cover the shortfalls in budget or cash. 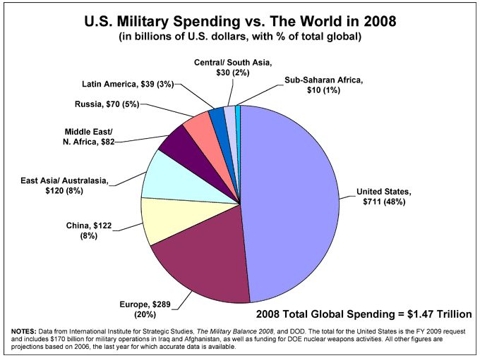 should learn from its experiences in Pakistan and Afganistan and not repeat the mistakes in Yemen, both in dealing with the government of Yemen and confronting al-Qaeda. The United States and other Western powers need to provide long-term economic development to reduce poverty and raise educational standards, which can help combat terrorism in a more effective fashion than just using military force.

Recently in his interview to Al Jazeera al-Qirbi stated that

Yemen is going to deal with terrorism in its own way, out of its own interests and therefore I don’t think it will counterfire, … The negative impact on Yemen is if there is direct intervention of the US and this is not the case.

One task is to prevent exaggeration of problem. The “war on terror” can be used as Yemen’s internal policy instrument when the President tries to transfer his power to his son by stamping the opposition as supporters of al Qaeda. In overall Yemen’s fragile government is in a delicate balancing act between its allegiance to the United States and tribal, political and religious forces that resent U.S. interference in Yemen and sympathize with al-Qaeda’s ideology.

From my point of view this the core question which often seems to be forgotten while U.S.MIC tries to secure its quarterly bonuses. I hope that at least EU understands that for solution one needs to take account sociological, religious, tribal and political aspects.

U.S. Coin strategy in Afghanistan tries to be more comprehensive than pure military attack, but it also can fail if presumptions are false – or moderated to get political acceptance. More about this in my article “Will Coin work in Afghanistan?”

Sure also civil crisis management operation can fail like it has been case in Balkans Some examples in my articles “Bosnia collapsing?” and “Kosovo update” . However this failure probably does not cost so many lives than failed or even successful military operation.

With these kind of economical interests it is easy to understand that a guy with burning trousers serves only as part of marketing plan to gain public acceptance. The planning of war started much earlier and probably MIC has already started planning of next invasion options after Yemen.