Turkey’s EU hopes -is there any?

“Yes, to Europeans, Turkey’s EU bid is dead. The fundamentally Roman Catholic continent simply has no intention of ever incorporating 70 million Muslims in one swoop. And Turkey—with its Ottoman history, which at one time threatened Catholicism’s very existence—has particularly negative associations in European minds. Still, given this nation’s strategic value to Europe, you just watch. Somehow, some way, the EU will continue to dangle carrots in front of Turkey in order to continue to benefit from doing business with it.” (The Trumpet) 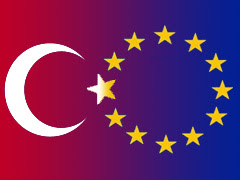 While Turkey is rising regional Eurasian superpower is EU-Turkey relationship still foggy. From my viewpoint it looks like EU has two strategies – outside official diplomatic statements – for future process with Turkey: Either EU is waiting that Turkey never will comply the membership criteria or it is innovating new obstacles to guarantee this. As Turkey is extremely important economical partner for EU as well rising EU’s energy hub there is a third way offered to Turkey – a “privileged partnership”.

Turkey submitted its application for associate membership in the European Economic Community in 1959. That was 51 years ago. seeking membership of the EU since 1987. Now Turkey, after

three decades of petitioning to join Europe, is an official candidate for membership in the European Union. Joining the E.U. requires meeting “European standards” for institutions that address a wide variety of legal, social, economic, and political issues. These include judicial and economic structure, the abolition of the death penalty, free speech and a free press, minority rights, and curbing military power. Since the EU symbolically opened membership talks in 2005, Turkey has provisionally solved only one (research and development) of 35 issues of concern to the E.U., and only begun to address 11 other policy chapters that candidates must complete. From these 11 eight remain blocked over Turkey’s failure to carry out the Ankara Protocol, which was signed in 2005 and states that Turkish ports should be opened to products from the European Union, including Greek Cypriot goods.

(More about formal process see enclosed “Fact Box: EU-Turkey Negotiation Process and The 35 Chapters” on the end of this article.)

There is many obstacles on Turkey’s road to EU accession like missing trade links with Cyprus, like Turkey’s refusal to open its ports and airspace to EU member Cyprus freedom of expression, like the rights of the Kurdish minority and need for Turkey to speed up its political reforms. However its is easy see that these issues are only useful cover to real unspoken fact that France and Germany, among others, don’t want Turkey to join EU.

In France some polls are showing over 80 % of population to be against Turkey’s membership. Nicholas Sarkozy, the French president, has already moved to torpedo Turkish accession to the bloc by stopping ratification efforts in five key areas. In Germany Angela Merkel’s Christian Democrats (CDU) and the Free Democrats (FDP) are both hostile to the accession. The CDU is against the Turks joining for cultural reasons while the FDP has said the country’s economy is too far below European standards to integrate comfortably with other members. Turkey – a country of 72 million – would be second only to Germany in scale if it were to join the EU. Although the government of the country is secular, estimates put the proportion of the population which is Muslim at around 99 percent. On other words it is Turkey’s overwhelming embrace of Islam which is the real issue against country’s EU membership.

Turkey rejects the idea of “privileged partnership”. Before Merkel’s visit Turkish Premier Erdogan repeated demands on Wednesday for full EU membership. “We are already conducting negotiations, and these are aimed at full membership. For us, there is no alternative,” Erdogan said in an interview with the German weekly Zeit. “Such a thing as privileged partnership does not exist, so we do not take that option seriously,” said Egemen Bagis, Turkey’s Europe minister. “At times I feel insulted for being offered something which does not exist.” Speaking to the press following their talks, Ms Merkel said she now understood that the term “privileged partnership does not have a good connotation in Turkey.”

“I don’t understand the reason of their hatred and grudge against Turkey. I wouldn’t expect this attitude from Merkel. I will share my opinions with her. Turkey is not a whipping boy.” (PM Erdogan)

Together with Spain, we run the United Nations Alliance of Civilizations initiative against extremism, which benefits Europe. We have been a member of the customs union since 1996, and we satisfy the political criteria established in Copenhagen. In fact, we are even closer to fulfilling the economic Maastricht criteria than some E.U. member states. And then there is the fact that we are a founding member of the Organization for Economic Cooperation and Development (OECD) and have been a member of NATO since 1952. This makes us a bridge between the West and 1.4 billion Muslims. 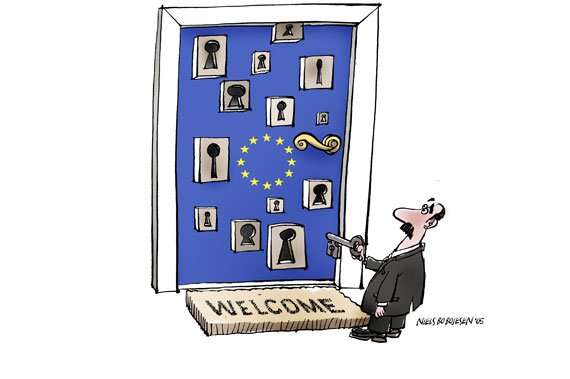 Beril Dedeoglu gives quite good description over Turkey’s position in her article “Germany-Turkey: a key relationship”

According to the Merkel government, Turkey will never be able to fulfill the criteria necessary to join the union; and even if it does, the EU members will not approve this membership. However, Germany also estimates that Turkey will become an unstable country if the process is simply abandoned. So Germany proposes implementing a “privileged partnership” to Turkey instead of full membership in order to allow Turkey into the EU economically but not politically. This proposal is perhaps reasonable for them; however, it is not rational from Turkey’s perspective. Turkey has no intention to build ties with the EU other than membership. If the membership process fails, Turkey can pursue its bilateral relations with some EU countries, concluding trade or investment agreements with them or initiating cooperation on security and defense matters, but no one can guarantee that Germany will be one of the countries Turkey will choose to develop its relations with. Furthermore, if Turkey does not become an EU member, it will no longer have the obligation to realize the “free trade area +” project, called privileged partnership, with the EU. We already have the customs union, which has reached its limits and which creates serious problems. If the membership expectation disappears, Turkey will definitely do something about it and try to establish other free trade areas in the region.

Privileged partnership means that Turkey must adopt the acquis without the right of being represented in EU institutions. However, no one is capable of explaining why a non-member Turkey would accept the acquis or how it would be able to finance the cost of reaching EU standards. In the event of a privileged partnership, the EU will not ask Turkey to adopt the principles of high levels of democracy and being a state of law; this idea’s partisans in Europe are convinced that Turkey would be amazed by that. Although it is true that this would please some in Turkey, one must not neglect the social demands in Turkey in favor of democratization, as they have reached unprecedented levels. 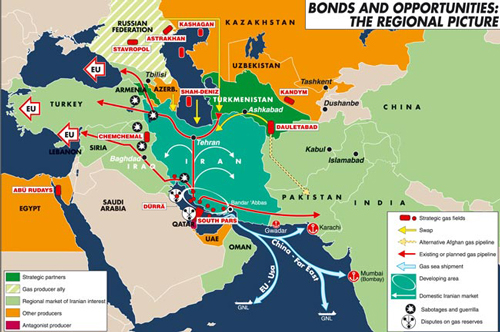 Turkey holds a strategic role in natural gas—between the world’s second largest natural gas market, continental Europe, and the substantial gas reserves of the Caspian Basin and the Middle East. Turkey is positioned to play an even bigger role linking gas producers in the Caspian and Middle East to consumers in south-eastern and central Europe. It is developing energy corridors with Russia (Blue Stream I and agreed II), cooperation with Russia’s South Stream, it is participating to proposed EU’s Nabucco gas pipeline project and a potential Iranian gas transit deal.

Turkey also imports liquefied natural gas (LNG) from Algeria and Nigeria to its only regasification plant at Marmara Ereglisi. LNG imports have continued to rise as Turkey seeks to diversify its sources of gas imports. Turkey is also taking steps to increase regasification capacity at two of its ports.

The EU’s new “southern corridor” has been dubbed a version of U.S. “Silk Road Strategy” aimed to block Russia from gas fields around Caspian Sea and its connection to Iran (More in my article “Is GUUAM dead?). The South Pars natural gas field brings a new element to change original U.S. plan as it is a sign of a long-term energy alliance between Moscow and Tehran and with active participation of the EU. Turkey and Armenia may be join the project as transit countries. Naturally, this leaves Washington very few chances to lobby its energy projects in the region aimed at using Azerbaijan and Georgia as the so-called ‘Caucasus communication corridor’.

In my conclusion during next few years Turkey will come an energy hub through further development of Blue Stream pipeline from Russia and implementation of South Stream, possible implementation of Nabucco and planned import of gas from Iraq and Iran. So in energy game Turkey will have some aces; if not membership EU must offer very attractive “third way” solution for Turkey. 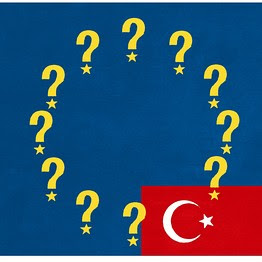 During last bilateral (Germany/Turkey) talks, Mrs. Merkel detailed her view that Turkey be offered a “privileged partnership”, which Turkey has initially rejected. From my viewpoint that may be unwise as the alternative would be continuing a negotiation process without any guarantees of success.

The EU’s fear is that if Turkey does not get membership Ankara would look for other partners on energy and security, perhaps getting closer to the China-Russia-Iran axis. So Germany proposes implementing a “privileged partnership” to Turkey instead of full membership in order to allow Turkey into the EU economically but not politically. This proposal is perhaps reasonable for them and from my viewpoint rational also to Turkey.

Some Western Balkan countries are a bit similar situation than Turkey. In my article “Serbia on the road to EU” I concluded following, which in my opinion could as well applied with Turkey:

From my point of view Serbia should think if joining to EU is worth of time, money and bureaucracy it demands. Visa arrangements, free trade and some EU programs are possible also for non-members. However I think that at this moment it would be good idea to continue EU process but not because of fulfilling EU needs. The motivation should be the needs of the beneficiaries aka Serbs not EU elite in Brussels. Also from my point of view Serbia should not put all eggs in the same basket; economical cooperation with Russia and other BRIC countries can create real development on the ground instead slow development on the EU’s negotiation tables.

From my point of view “privileged partnership” could preindicate a possible search of “third way” between EU member- and non-membership. The model – when first created – could be copied also with some other countries which now are in enlargement process or included in Eastern Partnership program, which aims to promote economic and political stability in the countries. It includes free trade agreements, visa waivers, financial aid and economic integration with the EU. In return, the eastern neighbors are expected to step up progress toward economic modernization, democracy, the rule of law and human rights.

On the bottom line “privileged partnership“ could be a pragmatic model of the future relations between Turkey and the EU, it can be applied also to other neighbourhood countries e.g. via Eastern Partnership Programme and can even be better alternative for all stakeholders than full EU membership.