“Less than one percent of priests are guilty of this…” ( Ratzinger) When visit of pope Benedict is coming closer in UK a wide debate has started about possibility to put pope in court due protecting paedophile priests. George Monbiot wrote in the Guardian how the case against pope rests on international law’s potential to judge all alike. A quote:

Over the weekend, the authors Richard Dawkins and Christopher Hitchens announced that they’ve asked lawyers to prepare a case against the pope. Recently, in the Guardian, Geoffrey Robertson, the barrister they are consulting, explained that senior churchmen who protected paedophile priests, swore their victims to secrecy and allowed the perpetrators to continue working with children, committed the offence of aiding and abetting sex with minors. Practised on a large scale, this becomes a crime against humanity recognised by the international criminal court. This is the general Vatican policy over which the then Cardinal Ratzinger is accused of presiding. When Benedict comes to the UK in September he could, if Dawkins and Hitchens get their warrant, be arrested.

An article “The pope should stand trial” by Richard Dawkins – a scientist and writer – was most viewed in the Guardian and gives more reasons for case.

From my viewpoint not only the Pope but Vatican as state and some its institutions should put on trial for crimes against humanity. And not only due the spreading paedophile scandal but WWII crimes too. With later I have in my mind especially Vatican’s role in holocaust and preserving war criminals from justice. These issues are dealt in my earlier article “Jasenovac – Holocaust promoted by Vatican” but the crucial questions were following:

During WWII Croatia’s Ustashe leaders declared that they would slaughter a third of the Serb population in Croatia, deport a third and convert the remaining third from Orthodoxy to Roman Catholicism. 3rd biggest extermination center – behind Auschwitz and Treblinka – created by Nazis was Jasenovac in Croatia. The death toll is estimated to be 300,000 to 700,000, some 80 % of them Serbs the rest Jews and Romas. While for Nazi-Germany Jasenovac was more a tool for ethnic cleansing for Ustashe religious aspect played crucial role. The religious motivation may be the explanation to the extreme brutality of butchers in Jasenovac. 743 Roman Catholic priests personally murdered Serbs, Jews and Gypsies. Jasenovac 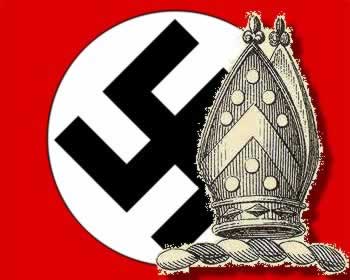 was for a time, run by Fr. Filipovic-Majstorovic, a Catholic priest. The Jasenovac system of Croatian camps also included a camp for children run by Catholic nuns who used toxic soda to save bullets.

As the war ended, the Vatican Bank helped to and transfer funds Franciscans in Rome helped smuggle and launder the Ustasha Tresury, which was looted from victims of Jasenovac. The Vatican not only hoarded the gold the Croats looted, it also helped Ustasha war criminals in escaping justice in what is now nicknamed the “Vatican Ratline”.

In principle I think that these kind of issues should be handled in international court like International Court of Justice (ICJ) or The International Criminal Court (ICC) both in Hague or in some maybe new International Criminal Tribunal (like ICTY for Yugoslavia and Ruanda). The second option could be trial in national courts like now ongoing against Vatican in US and now planned in UK. Third possibility could be solving case outside courtroom with money and compensations but I prefer more formal procedure or at least that Vatican would really confess its guild for events during WWII and after that.