The Gaza Flotilla is a model example of successful PR action to gain political aims. Israel sent commandos on an “aid” flotilla trying to pierce the blockade that both Israel and Egypt have imposed on Gaza, a territory controlled by the Islamist Hamas. Six vessels carrying nearly 700 activists after mission organizers ignored the Israeli government’s weeks-long call to bring the cargo to an Israeli port, where it would be inspected and transferred to Gaza.

When the Israeli soldiers then took over six ships five of these agreed to follow the orders of soldiers from Israel Defence Force (IDF) to redirect their route to the port of Ashdod instead Gaza strip. However one ship, the Mavi Marmara, was different than the other five ships of the flotilla. The Mavi Marmara was sponsored by a Turkish humanitarian relief fund -IHH – and there the Israelis meet a resistance that clearly – and fatally – caught them by surprise.

The death toll some 9-16 as well dozens of wounded ones from both sides spread into head lines in world media. Already now it is possible to size up the Islamist manoeuvre as tactical success. The question from the very beginning was not the humanitarian aid, if it were then the sponsors of the flotilla would have worked with Israel and Egypt to bring in the aid by land after a requested inspection of the goods. And they would not have declared victory in advance, regardless of whether any suffering was alleviated, as Hamas leader Ismail Haniyeh did earlier claiming that it did not matter if the aid reached Gaza or if it was intercepted. The humanitarian supplies brought on board were just a ploy to hide their avowed political objective.

If taken the flotilla case away from its political context or from real objectives of the flotilla organizers the whole event was possible to avoid. Israel did all it could to stop it. Appeals to Turkey went unheeded and that country let the flotilla sail and gave its assistance. Israel offered to have all humanitarian supplies brought to the Ashdod port where they could then be sent to Gaza through our crossings. Israel also asked the “peace militants” to transmit a letter to captured IDF soldier Gilad Schalit, who has been in Hamas custody for almost four years.

The militants were not interested in any humanitarian operation. They wanted to carry out their joint Arab-European propaganda offensive against Israel in order to delegitimize the Jewish state, deepen its isolation and provoke an international outcry. The operation of Israeli Commandos took place 4.30 am. At 09.00 am the Israeli government was still silent about events. First official statements from Israel came at 3.45 pm – that is nearly 12 hours too late. It is clear that when other side had possibility to tell their side of story so this first impression also spread globally as given fact. Besides the drama about aggressive attack against poor civilians and massacre is always easy to sell due choking headlines. First strike in media was a success and has already got its political impact.

IHH – militants instead of peace activists

The Foundation for Human Rights, Liberties and Humanitarian Relief (IHH) played a central role in organizing the flotilla to the Gaza Strip, is a Turkish humanitarian relief fund with a radical Islamic anti-Western orientation. Besides its legitimate philanthropic activities, it supports radical Islamic networks, including Hamas, and at least in the past, even global jihad elements. IHH has strong sympathy among Turkey’s ruling party, but is banned in Israel, which accuses it of links to Hamas and al-Qaeda. IHH’s orientation is radical-Islamic and anti-American, and it is close to the Muslim Brotherhood (Hamas’ parent movement). IHH is a member of the Union of Good, an umbrella organization of more than 50 Islamic funds and foundations around the globe, which channels money into Hamas institutions in the Palestinian Authority-administered territories.

The CIA as long ago as 1996 noted it was linked to “Iran operatives” and gave “support for extremist/terrorist activity”, including in Bosnia. In 2001, Jean-Louis Bruguiere, the prominent French counter-terrorism magistrate, said at the trial of the “millennium bomber” that IHH had played “an important role” in the plot to blow up Los Angeles airport. He said the charity was “a type of cover-up” to infiltrate mujahideen into combat, get forged documents and smuggle weapons. In 2006 Turkish security forces raided the IHH’s Istanbul bureau and found firearms, explosives and bomb-making instructions, as well as records of calls to an al-Qaida guest house in Milan. The Turkish investigators concluded this “charity” was sending jihadists to Bosnia, Chechnya and Afghanistan.

More about IHH and similar Islamic organisations in “The role of Islamic Charities in international terrorist recruitment and financing” by Evan F. Kohlmann – a publication of Danish Institute for International Studies 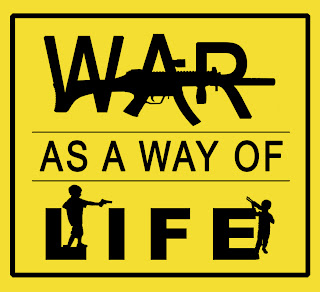 On board the Mavi Marmara ship that arrived as part of the flotilla towards Gaza was a group of approximately 40 people with no identification papers, who are supposed to be mercenaries belonging to the Al Qaeda terror organization. This group wore bullet-proof vests, and carried with them night-vision goggles, weapons, and large sums of cash. Gaza flotilla participants chanted Islamic battle cry invoking killing of Jews. The name Khaibar mentioned in battle cry was the last Jewish village defeated by Muhammad’s army in 628. Video “Kill the Jews” about Gaza flotilla can be found here (Palestinian media watch/Al-Jazeera, 29.5.2010)

In my opinion the embargo is an acceptable measure taken between entities that are in a state of armed conflict, as are Israel and Hamas-run Gaza. On 4 Nov 2009 Israel caught approximately 200 tons of weapons, rockets, and missiles were found on the ship – Francop – disguised as civilian cargo flying an Antiguan flag, which was intercepted and brought to the Ashdod port. This cargo were smuggled by Iran to Hezbollah. (Slide show about case here)

The cargo was taken off the boats at the Ashdod port and checked there, in accordance with the Israeli embargo on Gaza. Much of the equipment and supplies aboard the “humanitarian” ships for Gaza has been checked and found to be worthless. Many of the medicines are expired and/or came in an assorted, not easily organized manner. In addition, much of the equipment is in poor condition. Despite this, it is being taken to the Kerem Shalom crossing, and will be distributed in Gaza by human rights organizations.

The humanitarian situation in Gaza however is alarming. Israel allows about 15000 tonnes of humanitarian aid like food and medicines into Gaza every week, but not enough e.g. construction materials. Besides emergency relief the international community gives also huge donations for capacity building activities. One problem however is that The impact of the international assistance is poor if not even non-existent in relation to sustainable development. As The Palestine Economic Policy Research Institute (MAS) concluded “it has been almost impossible to trace any positive impact of these mobilized resources on the ground” . More about MAS analysis in “Placebo effect for people and society with 20 bn bucks” .

“Bit by bit Israel is turning into more of a burden than asset for the US,” (Mossad chief Meir Dagan)

The Gaza Flotilla was successful political manoeuvre planed by Hamas and their supporters. Success was guaranteed by win-win position of operation. Either the Flotilla goes through blockade or Israel uses force to stop it – with both cases Hamas could take a tactical win. The later option realized even better than dreamed: There were casualties, there were Western politicians, aid workers from Israel’s former ally Turkey, there were other useful public figures brought along for camouflage to guarantee media coverage. Same time IDF acted according insufficient information without sufficient force and was late in its media response giving the theatre on hands of Hamas. The early conclusions that Israel aggressively attacked Turkish aid vessel carrying desired humanitarian relief to Gaza will have its effect to political climate long time.

The most severe impact in short term is that Israel’s relations with Turkey could be unfixable. The US will have more and more difficulties in UNSC defend Israeli’s viewpoint and US lead proximity talks between Israel and the Palestinians could be stopped. UN, EU etc also will put pressure for Israel to lift the blockade on Gaza. Israeli’s position that the successful arrival of the flotilla in Gaza would have created “a corridor of arms smuggling” is not gaining wide understanding now and the new flotillas are already on the way.

“Placebo effect for people and society with 20 bn bucks”