While negotiations on Iran’s nuclear program in Geneva are continuing some WikiLeaks documents are highlighting the other – military – option to solve the problem. According to these classified cables, Saudi Arabia had been pressing the US to attack Iran’s nuclear sites before it developed a weapon. Saudis are not alone with their aggressive position. According to the U.S. State Department documents, Bahrain’s King Hamad bin Isa al-Khalifa. indicated to Gen. David Petraeus in 2009 that Iran’s nuclear program should be stopped, saying, “The danger of letting it go on is greater than the danger of stopping it.”

From my point of view much more interesting information is coming from DEBKAfile‘s intelligence sources that the secret Saudi-Israeli meetings on Iran have been taking place for more than a year and will also to continue after the changing of the guard at the Mossad. The meetings between Saudi General Intelligence Director Prince Muqrin bin Abdaziz and Meir Dagan, most of which were held in the Jordanian capital Amman, dealt extensively with clandestine cooperation between the two agencies and plans for attacking Iran. Arab and Western sources reported that they reached agreement in the course of the year for Israeli fighter-bombers to transit Saudi air space on their way to bombing Iran’s nuclear facilities. The Saudis were even willing to build a new landing strip in the desert with refuelling facilities for the use of the warplanes en route to their mission.

Few years ago a senior military intelligence official told the U.S. Embassy that the Government of Israel does not know where all of the targets are located and said that any attack would only delay, not end, the Iranian program. Also then the MFA’s (foreign ministry) office director for the Gulf states noted that potential target sites are well dispersed throughout the country, with several located in built-up civilian areas. In addition, the GOI is acutely aware of Iran’s ability to retaliate, both militarily and through attacks by its regional surrogates. PM claimed that Hizballah has 11,000 rockets (and possibly UAVs) capable of reaching Israel from launching sites in Lebanon. This old information may not be expired even today. (Wikileaks cable 05TELAVIV1593) 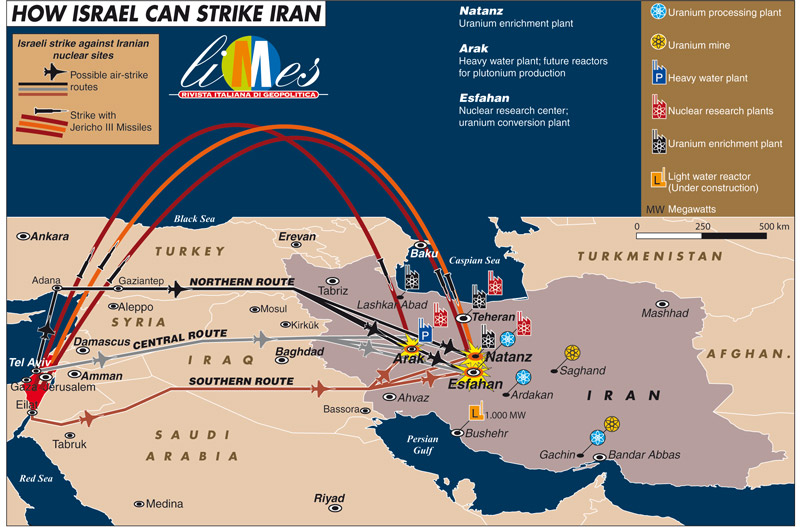 The Mossad is widely seen as responsible for a wave of covert actions including the sabotage of Iranian nuclear projects. Prof. Majid Shahriari, who died when his car was attacked in North Tehran Monday, Nov. 29, headed the team Iran established for combating the Stuxnet virus rampaging through its nuclear and military networks. The scientist’s death deals a major blow to Iran’s herculean efforts to purge its nuclear and military control systems of the destructive worm. Only this month, Stuxnet shut down nuclear enrichment at Natanz for six days from Nov. 16-22 and curtailed an important air defence exercise. Prof. Shahriari was the Iranian nuclear program’s top expert on computer codes and cyber war. Another Iranian nuclear scientist, Prof. Feredoun Abbassi-Davani, and his wife survived a second coordinated attack with serious injuries. This was the fifth attack in two years on Iranian nuclear scientists in Tehran.

A special unit for providing nuclear scientists, their homes and families with the same level of security as heads of the regime is being set up jointly by Iran’s Intelligence Ministry (MOIS), Revolutionary Guards and Al Qods Brigades. Top scientists are to be provided with armoured-plated vehicles able to withstand sticky bombs and RPG.

According the New York Times a diplomatic cable (from the WikiLeaks cache) from this past February confidently describing the sale of 19 missiles to Iran by North Korea that could give Tehran the ability to strike Western Europe and Russia. American officials appear to agree on is that at the very least North Korea sold a number of ballistic missile parts to Tehran in 2005. The sale set off alarms in Washington, because the parts were for BM-25 missiles, a weapon with powerful engines that — if deployed by Iran — could bolster Tehran’s ability to strike far beyond the Middle East (with a 2,000-mile range), State Department cables show.

The other cable (from Spring 2006/AR) discusses a meeting between the Connecticut Senator Lieberman and Meir Dagan, director of Mossad/Israel’s main spy agency. According to the cable, Mr. Dagan talked of Iran’s having a medium-range missile, the Shahab-3, that “can currently carry nuclear material, and reported that Iran is also trying to adapt the BM-25 missile, which already has a longer range, for this purpose.” (Source WikiLeaks/NYT). For Israel, the introduction of the BM-25 would have relatively modest impact on its strategic calculation, since Iran already has the ability to strike Israeli cities with ballistic missiles, but it would allow Iran to disperse its launchers over a much larger area in the eastern part of the country.

However the core question related to Iran’s ability to defend herself against Israeli airstrike is the Russian-Iran deal of S-300 anti-aircraft missile system that scares every Western air force with range of 200 km. To wait if U.S.’s “Reset” strategy will work, Russia has put missile deal on hold. The S-300s changes Iran’s nuclear gambit as without them airstrike against Iran is still possible option, with S-300s the risk might be too high. Also Iran has designed and tested successfully an air defence system that has the same capability as the Russian-made S-300 missile system. Iran claims that they have developed the system by upgrading systems like S-200 and we tested it successfully.

Iran has developed its defence not only against air strikes but against sanctions too. DEBKAfile‘s military and intelligence sources disclose that despite the six-day shut-down of the Natanz uranium enrichment plant from Nov. 16-22, due to an invasion by the Stuxnet malworm and the serious injury suffered by Prof. Fereydoun Abbasi, Director of Centrifuge Operations, the Iranian program has managed to come within touching distance of its goal: It is only 4.7 kilos short of the 28.2 kilos of 19.75 percent enriched uranium needed for going into weapons-grade production. The Iranians need no more than a few weeks, up to early February at the latest, to reach that goal. Israeli Prime Minister Binyamin Netanyahu, for his part, will have to face up to falling down completely on his solemn, oft-repeated vow to never allow the Islamic Republic acquire nuclear arms. When the uranium powder can be used for making homemade rods – both to fuel nuclear reactor cores and produce plutonium, the alternative to enriched uranium for weapons-grade fuel. Conclusion: Iran no longer depends on imported materials to move forward at speed toward an N-bomb on both self-sufficient tracks –unhindered by sanctions. (Source: DEBKAfile )

King Abdullah describes a conversation he had with with Iranian Foreign Minister Manouchehr Mottaki, on the issue of Iran’s “interference in Arab affairs.” Abdullah challenges Mottaki on Iranian meddling in Palestinian politics and support for Hamas. “These are Muslims,” he quotes Mottaki as responding. “No, Arabs,” countered Abdullah, before adding, “You as Persians have no business meddling in Arab matters.” quote the Saudi king’s assertion of Iranian aid to the Houthi rebels in Yemen. So the leaked cables provide added and deepened color to an already existing picture of regional cold war.(Source: Jerusalem Post/WikiLeaks)

Hamas government’s deputy foreign minister Dr. Ahmed Yousef is actively campaigning for the Gaza regime to form a strategic partnership with Iran on the same lines as the Iranian-Syrian-Hizballah alliance. He also invited Iranian President Mahmoud Ahmadinejad to visit Gaza. Close ties between Gaza and Tehran will bolster the Palestinian extremists’ military and intelligence ties with Damascus and Hizballah. This will in turn boost the bloc led by Iran and Syria and add to its leverage for derailing any fence-building moves between the feuding Hamas and Mahmoud Abbas’s Fatah and perpetuate the division between the two Palestinian entities – one in Gaza and the other on the West Bank. This stronger alliance

may also threaten the stability of Jordan, where already Hamas-Damascus controls the local Muslim Brotherhood branch.

The Kuwaiti newspaper Al-Rai Al-Aam reported on Wednesday that the Shi’ite organization has completed its preparations for a war against Israel, including the construction of an extensive network of tunnels throughout the whole of Lebanon. According to the report, Hezbollah has completed equipping its arsenal of missiles and weapons and finished building its defensive network against a possible Israeli attack. Likewise, Hamas has reportedly dug tunnels between Rafah and Gaza City of a similar nature to the Hezbollah tunnels. The network stretches from the length of the Lebanon’s coast to the country’s mountainous eastern region.

Egypt’s intelligence chief, Omar Suleiman, in a meeting with Joint Chiefs of Staff chairman Adm. Mike Mullen, is more explicit regarding Egyptian efforts to counter Iranian subversion. Suleiman noted that Iran is “very active” in Egypt and that it is granting $25 million per month to Hamas and reports Iranian efforts to recruit among Sinai Beduin.

The WikiLeaks cable, written on April 16, 2008, by Michele Sison, the U.S. embassy’s charge d’affaires in Beirut, was based on a meeting she had with Lebanese Telecommunications Minister Marwan Hamadeh. She wrote that Hamadeh, who had requested “a special meeting,” had opened it by declaring, “Iran Telecom is taking over the country!” Hamadeh said the importance of the move for Hizbullah was that it was “the final step in creating a nation state. Hizbullah now has an army and weapons; a television station; an education system; hospitals; social services; a financial system; and a telecommunications system.”Hamadeh accused the “Iranian Fund for the Reconstruction of Lebanon” of funding the network. This group, according to the cable, has been rebuilding roads and bridges since the 2006 Second Lebanon War and has previously been accused of installing telecommunication lines in parallel with new roads. (WikiLeaks )

It’s understandable that Iran has some doubts about U.S. intentions. U.S. has strengthened its forces near Iranian shores with three aircraft carriers, four nuclear submarines and marine assault units. Earlier the influential Senator Lindsey Graham (R. South Carolina), member of the Armed Services and Homeland Defense committees, said: “The US should consider sinking the Iranian navy, destroying its air force and delivering a decisive blow to the Revolutionary Guards.”As part of this strategy, two weeks ago, the White House requested the heads of NATO to draw up operational plans for attacking Iran’s nuclear and military facilities.

With Iran’s nuke there is now more at stake than ever before: Iran is more resistant against sanctions, it has more developed anti-aircraft missile system and its ability to attack/respond is higher. On the other side international community may be slightly more unit by demanding that Iran limits its nuclear programme for peaceful purposes only. Pre-emptive punitive nuclear attack against Iran is however still possible so let’s hope that negotiations in Geneva will give some positive alternative to military option.