An additional battery of the Iron Dome anti-rocket system was deployed on 4th April 2011 in southern Israel. The battery, operated by commanders and soldiers of the IAF’s aerial defense network, will be deployed in as part of efforts to protect residents of the Israeli cities of Ashkelon and Ashdod against rocket fire from the Gaza Strip. This is the second Iron Dome battery deployed in southern Israel over the past few weeks. The first battery was deployed in the Be’er Sheba region the week of March 27th. (Source IDF )

Civilian areas in southern Israel were heavily shelled by Palestinian terrorists in Gaza during last weeks. Hamas’s armed wing, the Izzadin Kassam Brigades, claimed responsibility most part of them.

Today, there are over 950,000 Israelis living within range of rocket, mortar and Grad (more advanced version of standard Qassam) attacks, with the highest population in Be’er Sheva, where approximately 531,000 civilians have 60 seconds to find shelter in case of an attack. Since Hamas’ takeover in the Gaza Strip, rocket fire at Israel had risen exponentially, peaking in the period right before Operation Cast Lead with 3,278 rockets fired at Israel in 2008, and steeply decreasing since the end of the Operation in 2009.

If hostilities erupt, many of the projectiles that are likely to be fired at Israel will be short-range Katyusha and Grad rockets that have been used extensively by Hezbollah in Lebanon and Hamas in the Gaza Strip. These are the rockets that Iron Dome is designed to counter. During Hezbollah’s 34-day war with Israel in 2006, the Iranian-backed movement unleashed nearly 4,000 rockets against Israel, which had no defenses against such weapons. But now, the Israelis claim, Hezbollah possesses some 45,000 rockets and missiles, including weapons that can hit Tel Aviv. 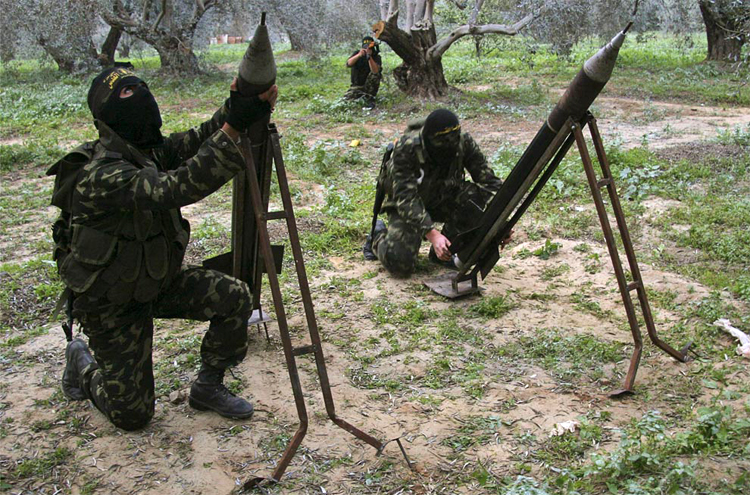 On March 2011, the Israeli Navy intercepted 50 tons of sophisticated weapons concealed in civilian cargo containers aboard the “Victoria”, which left Syria and was en route to Alexandria, Egypt. Of the 50 tons, the most strategically significant weapons found were 6 C-704 missiles.

Currently, there are no known C-704s held by Hamas or any other terrorist organization in the Gaza Strip. With a range of 35 kilometers, this anti-ship missile would have been used to threaten IDF and civilian activity off Israel’s southern coast, as well as natural gas resources vital to the livelihoods of Israeli citizens.

On December 2010 U.S. allocated $250 million dollars toward funding Israel’s advanced anti-rocket system, the Iron Dome. The funds are in addition to the more than $200 million allocated for the Arrow and David’s Sling, joint U.S.-Israel anti-missile systems.

The “Iron Dome” system, a significant achievement of the defense industries in Israel, is currently in an accelerated process of assimilation in the IAF and on the way to becoming

fully operational. The system is currently in an evaluation stage on an operational level. “Iron Dome” will provide part of the answer to the threat of rocket fire at Israel’s southern communities, not discounting shelters and offensive measures. The decision to accelerate the deployment of the system was made in light of recent events in southern Israel and according to security assessments. The deployment will not be permanent, allowing the systems to be moved between areas according to evolving security assessments.

The Iron Dome is an effective and innovative mobile defense solution for countering short range rockets and 155 mm artillery shell threats with ranges of up to 70 km in all weather conditions, including low clouds, rain, dust storms or fog. (Source: Rafael Defense Systems)

Iron Dome gives only limited security. The flight time of a Qassam rocket to Sderot (a southern town constantly hit by Hamas rockets) is 14 seconds, while the time the Iron Dome

needs to identify a target and fire is something like 15 seconds and the average flight time of the intercept missile to the point of encounter is another 15 seconds. To intercept a rocket using Iron Dome requires at least 30 seconds. This is the time it takes a Qassam to cover six kilometers. So Iron Dome can’t defend against anything fired from fewer than 5 kilometers and some critics says it probably wouldn’t defend against anything fired from 15 kilometers either, i.e. it would not be able to cover and protect all settlements surrounding the Gaza Strip.

The economic aspect is also significant as the cost of each Iron Dome intercept missile will be according Rafael about USD 40,000 and some experts are estimating it be as high as USD 100,000. In contrast, the cost of making a Qassam rocket is only a tiny fraction (USD 10-20/each) of those figures with Iron Dome.

As an alternative to Iron Dome there was – and in some degree still is – a proposal to bring into Israel the laser-based Nautilus/Skyguard defense system, whose development is nearly complete and whose effectiveness was proved in a series of tests (100 percent success in 46 tests, including success in intercepting mortar shells). Nautilus was developed in the United States in conjunction with Israel, but the Israeli defense establishment ended its participation in the project in 2001. The Americans went on with it, improved the system and changed its name to Skyguard. Northrop Grumman, the company that is developing the missile, promises that it can be delivered within 18 months at a relatively low cost. The Nautilus system itself, devised to protect Kiryat Shmona against Katyusha rockets, can be installed in Sderot within six months.

The major advantage of Skyguard is its use of a laser beam for interceptions. The beam travels at the speed of light, allowing the system to intercept short-range rockets like the ones aimed at Sderot. The cost of implementing the laser system is also far lower than Iron Dome. The cost of launching one laser beam will be between $1,000 and $2,000. The Defense Ministry of Israel however was more interested for developing blue-and-white (Made in Israel) systems, so Iron Dome was the selection.

Qassam rockets are simple home-made cheap weapons with practically non-existent military thread; their physical menace to civil population is minimal, the main effect is psychological. Anyway Iron Dome, when it is deployed, will constitute the bottom ring of a multi-layered anti-missile shield and the other levels are focusing to real dangers.

The David’s Sling system being developed by Rafael and the U.S. Raytheon Co. will cover the middle tier countering rockets with a range of 150-250 miles, primarily the Iranian-made Zelzal and Fajr rockets and Syria’s M600 weapons, all believed to be in Hezbollah’s possession. David’s Sling is also sometimes referred to as “Magic Wand” and is essentially designed to fill a gap between the Iron Dome system for short-range 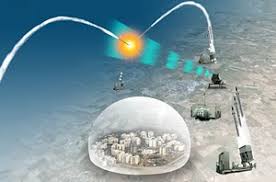 missiles, such as the Qassam, and the Arrow for long-range missiles such as the Iraqi Scud and the Iranian Shihab. On January 2011 The IDF’s “Magic Wand” (Sharvit Kesamim) system for intercepting intermediate-range rockets was successfully tested.

Ballistic missiles, such as Iran’s Shehab-3 and Sejjil-2 systems, will be countered by the long-range, high-altitude Arrow-2 system developed by Israel and the United States and soon with Arrow III upgrade, which will shoot down missiles outside Earth’s atmosphere through a booster-rigged satellite.

In general, the Israeli Arrow is a more advanced weapon than the Patriot and possesses far more range, undertaking high altitude interceptions and covering a wide area (est. 90km/ 54 mile range, maximum altitude 30 miles/ 50 km for Arrow 2) as a Theater Missile Defense (TMD) system. Unlike the USA’s THAAD, PAC-3, or SM-3 which all use “hit to kill” technology, Israel’s Arrow relies on a directed fragmentation warhead to destroy enemy missiles. The exoatmospheric, 2-stage Arrow-3 will use pivoting optical sensors and its own upper-stage kick motor, instead of separate control rockets for final steering. The goal is a highly maneuverable missile that can reach more than double the height of existing Arrow-2 interceptors, using a lower-weight missile. This will also have the effect of extending the missile’s range. Arrow III is expected to be ready by 2014 or 2015. One of the Arrow III’s advantages is that its destroying a nuclear missile would not rain down toxic radioactive debris. All such fallout would burn up as it re-enters Earth’s atmosphere. (Source Defense Industry Daily )

Israel gives Iran until 2015 to develop nuclear weapons. At least, Israel plans to have its multi-layered missile defense shield up by then, in anticipation that in five years Iran may still be ruled by those who want to wipe Israel off the map. In the meanwhile, Iran is bent on strengthening its own air defense. The Iranian government operates in fear that Israel may use preemptive strikes to nip its nuclear aspirations in the bud.

Israel has stated that it intends to use nuclear weapons to destroy Iran’s uranium enrichment facilities with tactical nuclear weapons. “Under the plans, conventional laser-guided bombs would open “tunnels” into the targets. “Mini-nukes” would then immediately be fired into a plant at Natanz, exploding deep underground to reduce the risk of radioactive fallout. “As soon as the green light is given, it will be one mission, one strike and the Iranian nuclear project will be demolished,” said one of the sources. “(Source Timesonline )

For years Hamas has had offensive intentions against Israel while its offensive capabilities have improved. In addition to its geographical proximity these qualities cover main part of classical balance of threat theory criteria and according this Israel’s answer are more sophisticated defense systems.

Speaking about justification related Qassam attacs by Hamas and Israel’s response to them, Richard Goldstone, writer of the Goldstone Report, gives interesting view in his Washington Post op-ed on 1st April 2011. Now Goldstone admitted that according today’s knowledge his report would have been a different document, especially its allegations of “possible war crimes” directed at Israel. Now Goldstone concludes that while Hamas clearly indiscriminately targeted civilians, subsequent Israeli investigations indicated that civilians “were not intentionally targeted as a matter of policy” by Israel. “I have always been clear that Israel, like any other sovereign nation, has the right and obligation to defend itself and its citizens against attacks from abroad and within,” he wrote. Noting that Hamas continues to target southern Israel’s civilian population, he added, “that comparatively few Israelis have been killed by the unlawful rocket and mortar attacks from Gaza in no way minimizes the criminality.”

From my point of view characteristic to Israeli-Palestine conflict is that the attacks of Hamas are made mostly against Israeli civil population while the Israeli counter attacks are targetted against militants with regrettable collaterial damages with Palestine civil population. Also attacks of Hamas are for conquering region inhabited by Jews, while Israel tries to protect their population in their country. The developing Israeli missile system is also made mainly for defense not for attack.

While armament continues the main focus of activities will remain in military options and weapons will also have a bigger role in local societies. Peaceful solutions naturally would be wiser both economically as well ethically. So far peace process has been never-ending undertaking with dead road maps and kept alive only by outside international efforts. If local stakeholders sometimes find motivation for deal some progress may be achieved.

Some of my recent articles over MENA region: