Arms Trade: The Crux Of The MIC

One aspect in geopolitical game is arms trade – from whom to buy and to whom to sell. Stockholm International Peace Research Institute (SIPRI) has studied for 2012-2013 to see to whom the two biggest military powers as well the two leading exporters of weapons – U.S. and Russia were supplying their weaponary.

The U.S. dealt to 59 nations that Russia doesn’t sell or send weaponry to, while Russia dealt to just 15 nations that don’t receive U.S. arms. Fifteen countries received weaponry from both the U.S. and Russia, including Afghanistan and Iraq. The U.S. supplies much of NATO and Middle Eastern allies like Turkey, Israel, and Saudi Arabia. Russia supplies many BRIC nations, as well as Iran, much of Southeast Asia, and North Africa.

The country that received the highest dollar amount of U.S. weaponry was the United Arab Emirates, with more than $3.7 billion in arms received over that period. Russia dealt the greatest value of weapons to India, sending more than $13.6 billion. Overall, the U.S. sent more than $26.9 billion in weaponry to foreign nations, while Russia sent weaponry exceeding $29.7 billion in value around the globe. (Source and more e.g. in Businessinsider ) 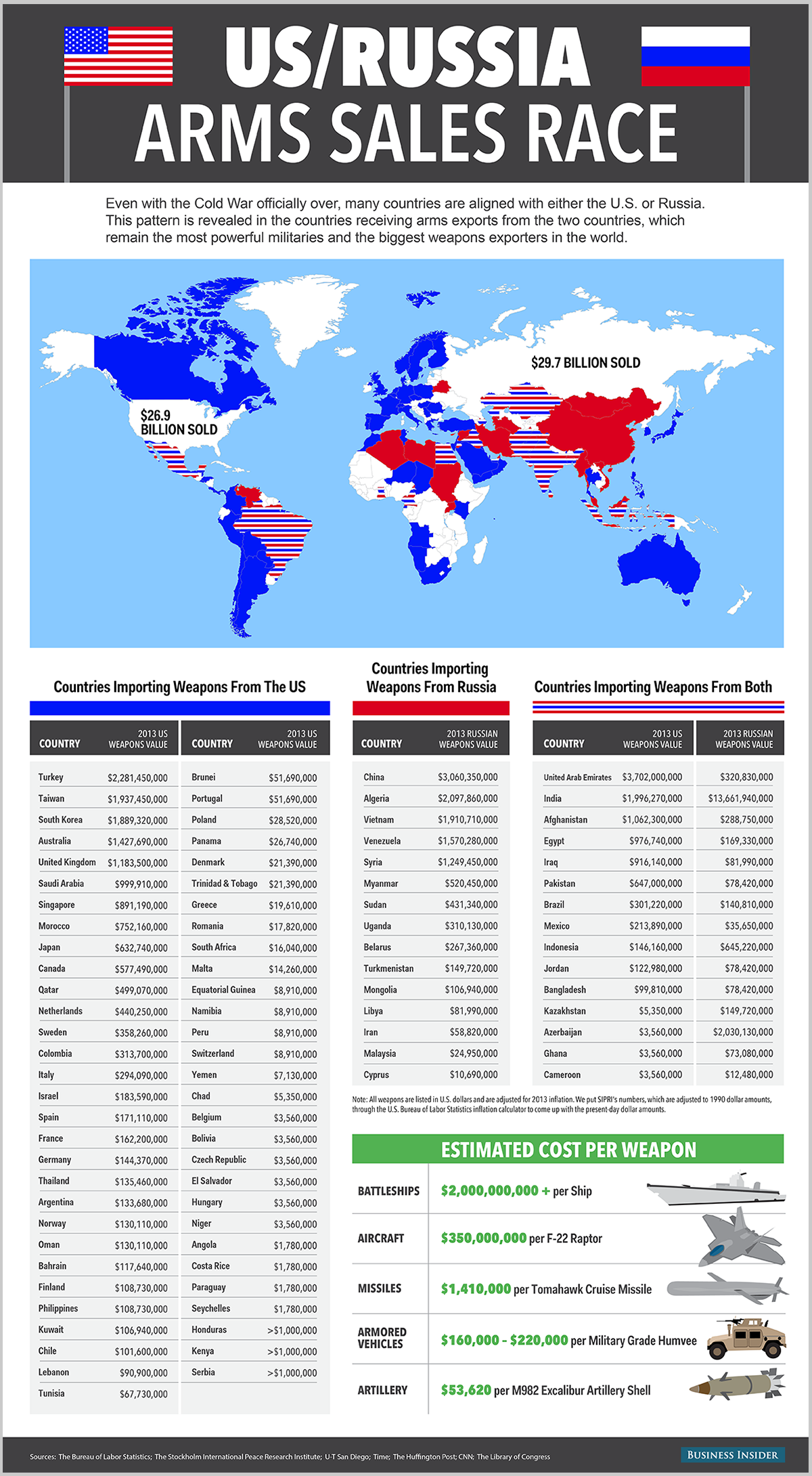 One should note that the SIPRI’s totals – figures in table above – don’t measure the cost of the transaction but the cost of the weapons’ production. The numbers are listed as the production value of the weapons sold rather than the amount they were actually sold for. So the numbers represent the transfer of military resources rather than the financial value of the transfer. In addition, SIPRI does not track the transfer of certain small arms.

SIPRI Arms Industry Database, which contains financial and employment data on the world’s major arms-producing and military services companies. Arms and military services sales (‘arms sales’) are defined by SIPRI as sales of military goods and services to military customers, including sales for both domestic procurement and export. Military goods and services are those that are designed specifically for military purposes and include the technologies related to these goods and services. Military goods are military-specific equipment and do not include general-purpose goods, such as oil, electricity, office computers, uniforms and boots. Military services are also military-specific. They include technical services, such as information technology, maintenance, repair and overhaul, and operational support; services related to the operation of the armed forces, such as intelligence, training, logistics and facilities management; and armed security in conflict zones. They do not include the peacetime provision of purely civilian services—such as health care, cleaning, catering and transportation—but supply services to operationally deployed forces are included.

Were the Soviet Union, to sink tomorrow under the waters of the ocean, the American military industrial complex would have to remain substantially unchanged until some other adversary could be invented. Anything else would be an unacceptable shock to the American economy.” (George F Kennan, 1987 )

The industry of manufacturing weapons of death and destruction is a peculiar one; its continued profitability is dependent on wars and conflict. A military-industrial complex (MIC) is composed of a nation’s armed forces, its suppliers of weapons systems, supplies and services, and its civil government.

Military-Industrial-Complex (MIC) – especially in U.S. – still rules the world. Global military industrial consumption represents a few percent of GDP and is still rising. U.S. share of the cake is about 40%. MIC is a concept commonly used to refer to policy relationships between governments, national armed forces, and industrial support they obtain from the commercial sector in political approval for research, development, production, use, and support for military training, weapons, equipment, and facilities within the national defense and security policy.

Picture above can be seen bigger HERE!

Today besides traditionel weaponery there is two important component in MIC: First is academia – only in U.S. about 350 colleges and universities are agreeing to do Pentagon-funded research. In Academic world neuro-weapons and diverse applications of numerous branches of research – such as the software guidance systems, general communications networking systems and robotics technology – that blur the distinctions between government, military, and medical, technological and scientific research. The second important factor is the media – to keep on MIC side. Media has been essential part of wars and conflicts last twenty years and media wars have been implemented before, during and after open conflicts for benefit of stakeholders and MIC. Indeed nowadays an better offshoot of the MIC is military–industrial -media-academy complex (MIMAC) as these two components have been widely integrated to the old MIC.

More about MIC in my article BTW MIC Still Rules .

Last year, global military spending reportedly exceeded $1.7 trillion – more than $4.6 billion a day, which alone is almost twice the UN’s budget for an entire year. While the West still spent over half of global defence outlays in 2013, this is down from two-thirds of global totals in 2010. Overall, although emerging economies continue to ramp up their defence-spending levels, defence-budget cuts in Western states and the drawdown of military operations in Afghanistan have meant that, globally, real defence spending fell in 2013.

Western states have been struggling with economic recession during the past years. To stimulate economic grouwth investment in construction contracts for the military apparatus might be an attractive idea as well economic stimulation through the purchase of military related commodities like oil, metals and other raw materials. This behavior is driven by the corporate world and not from the needs of defence. However the state has also important role while providing the justification for using the means to warfare.

One should note that figures above represent only information collected from official sources. The whole picture about arms trade is much more wider if clandestine operations, smuggling, illegal trade etc are added. One example about these activities is described in my article – U.S. Recycles Its Old Balkan Practice With Syria . 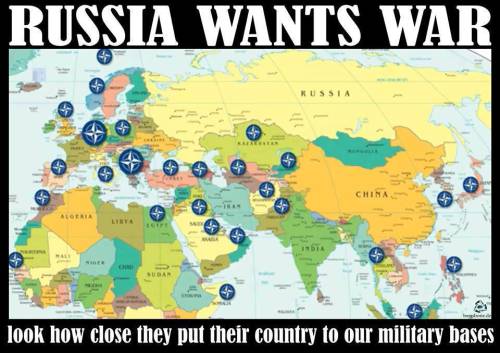