Ongoing western sanctions due Ukraine are pushing China and Russia to close cooperation – the great Eurasian axis is already in motion. Despite the headlines in mainstream western media related to civil war in Ukraine the primary war is being fought monetarily. The Russia-China Strategic Partnership (RCSP) is truly global in scope, having come to encompass the entire world to varying degrees. The Ukraine War might be the U.S. Dollar Waterloo event.

As the Americans and their allies are trying to squeeze Russia and Iran with a combination of economic sanctions and political isolation, alternative poles of power are emerging that soon may present a serious challenge to the U.S.-dominated world that emerged from the end of the Cold War.

The Russian response to ongoing western sanctions has been launching a counter-strategy that could bring the cost boomeranging right back to Washington. Namely, the formation of a potential non-dollar trading block among major players in the global energy markets including Iran and China.

The end of the Petrodollar

(In 1971 Richard Nixon was forced to close the gold window taking the U.S. off the gold standard and setting into motion a massive devaluation of the U.S. dollar.In an effort to prop up the value of the dollar Nixon negotiated a deal with Saudi Arabia that in exchange for arms and protection they would denominate all future oil sales in U.S. dollars. )

For decades, virtually all oil and natural gas around the world has been bought and sold for U.S. dollars. Since World War II, America’s geopolitical supremacy has rested not only on military might, but also on the dollar’s standing as the world’s leading transactional and reserve currency.

Last year Russia produced about 10.5 million bbls. of oil per day and exported 70% of it. That amounts to nearly 2.6 billion barrels with a value of nearly $250 billion at world market prices. It also exported the equivalent of nearly 1 million barrels per day of natural gas with a market value of upwards of US$50 billion. The truth is that Russia is the largest exporter of natural gas and the second largest exporter of oil in the world. If Russia starts asking for payment in currencies other than the U.S. dollar, that will essentially end the monopoly of the petrodollar.

China just overtook the US as the world’s largest economy. The US national debt is now past €17 trillion. China – their biggest creditor – has been cutting on US debt holdings and hoarding gold on the side to be prepared for the possible collapse of the dollar. The US federal government ran an estimated budget deficit of $486 billion, or 2.8 per cent of GDP, in fiscal year 2014. By contrast, Russia just posted a federal budget surplus of 2 per cent of GDP.

When U.S. politicians started plan economic sanctions on Russia, they probably never even imagined that there might be serious consequences for the United States. But now the Russian media is reporting that the Russian Ministry of Finance is getting ready to pull the trigger on a “de-dollarization” plan. For decades, virtually all oil and natural gas around the world has been bought and sold for U.S. dollars. As I will explain below, this has been a massive advantage for the U.S. economy. In recent years, there have been rumblings by nations such as Russia and China about the need to change to a new system, but nobody has really had a big reason to upset the status quo. However, that has now changed. The struggle over Ukraine has caused Russia to completely reevaluate the financial relationship that it has with the United States.

The largest natural gas producer on the planet, Gazprom, has signed agreements with some of their biggest customers to switch payments for natural gas from U.S. dollars to euros. If other nations start following suit – start trading a lot of oil and natural gas for currencies other than the U.S.$ – that will be a massive blow for the petrodollar, and it could end up dramatically changing the global economic landscape.

Moscow, allied with the BRICS, is actively working to bypass the US dollar. The core point is that Russia is not alone. Besides the BRICS also the G-77, the Non-Aligned Movement (NAM), the whole Global South is critical to U.S. led bullying and would like to have other alternative in international relations. This past summer, the BRICS countries created an alternative to the largely U.S.-controlled World Bank and International Monetary Fund (IMF), and the Shanghai Cooperation Organization (SCO) added 1.6 billion people to its rolls.

Back in 1971, it was necessary to assure that the dollar would retain its position in world trade as the world’s premiere currency, in spite of the fact that it was no longer backed by anything. The U.S. reached an agreement with Saudi Arabia that, in trade for arms and protection, the Saudis would denominate all future oil sales, worldwide, in dollars. The other OPEC countries fell into line, and the “petrodollar” was assured.

Now the Sino-Russian cooperation is challenging the Americans, and there are many countries that would be happy to join them in dethroning the US dollar as the world’s reserve currency. The historic gas deal between Russia and China is very bad news for the petrodollar – it might be start of the “de-Americanised” world.

On April 24th 2014 the Russian government organized a special “de-dollarization meeting” dedicated to finding a solution for getting rid of the US dollar in Russian export operations. Top level experts from the energy sector, banks and governmental agencies were summoned and a number of measures were proposed as a response for American sanctions against Russia.

“Over the last few weeks there has been a significant interest in the market from large Russian corporations to start using various products in renminbi and other Asian currencies, and to set up accounts in Asian locations,” Pavel Teplukhin, head of Deutsche Bank in Russia, told the Financial Times, The renminbi is the official currency of the People’s Republic of China. literally means “people’s currency”. The yuan is the basic unit of the renminbi, but is also used to refer to the Chinese currency generally, especially in international contexts.

Moving the yuan towards internationalisation involves three distinct phases: turning the Chinese currency into a) a trading currency, b) an investment currency, and c) a reserve currency.

China is the largest producer of gold in the world, and it has also been importing an absolutely massive amount of gold from other nations and in addition China plans to buy another 5,000 tons of gold.) There are many that are convinced that China eventually plans to back the yuan with gold and try to make it the number one alternative to the U.S. dollar.

If China does decide to back the yuan with gold and no longer use the U.S. dollar in international trade, it will have devastating effects on the U.S. economy. If other nations stopped using the dollar to trade with one another, the value of the dollar would plummet dramatically. One could claim that the entire way of life in U.S. depends on the U.S.$ being the primary reserve currency of the world. (Source: The Economic Collapse ) 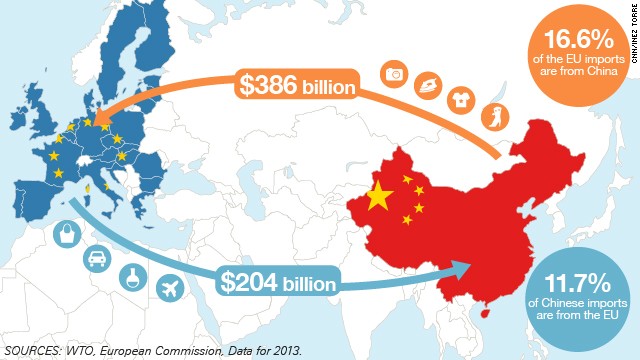 The dollar does not just predominate in China’s trade with the United States, but with other countries as well. The first steps towards the internationalisation of the yuan emerged in 2008-2009. At that time, businesses and companies were allowed to use the yuan in trade with Hong Kong (Xianggang), Macau, and ASEAN countries. In 2012, every Chinese company with a licence for export and import transactions was able to use the yuan. An active transition to foreign trade settlements in yuan is happening alongside an increase in the use of the national currencies of China’s trading partners. This is being facilitated by the signing of bilateral currency swaps between the People’s Bank of China (PBC) and the central banks of China’s trading partners. To date, the PBC has signed more than 20 currency swap agreements. At the end of 2013-beginning of 2014, the yuan overtook the euro in terms of the amount of payments used for international trade, and took second place after the US dollar. According to the People’s Bank of China (PBC) , there was more than 1.3 trillion yuan overseas at the end of 2013, which is equivalent to approximately US $250 billion. In fact, this money is forming an offshore yuan market. At present, the yuan can be directly converted with the US dollar, the Japanese yen, the Australian dollar, the Russian rouble, the Malaysian ringgit, and the New Zealand dollar. The latest such agreement was signed between China and New Zealand in March 2014. (Source: Strategic Culture Foundation )

In my conclusion the era when the IMF, World Bank, and U.S. Treasury could essentially dictate international finances and intimidate or crush opponents with sanctions, pressure and threads are drawing to a close – the BRICS and the Shanghai Cooperation Organization are two nails in that coffin. These independent poles (BRICS, SCO, USAN) are developing fast and it remains to see what their ultimate impact on international politics will be – my scenario is that the impact will be a drastic shift from U.S. dominance to more balanced juxtaposition of U.S. and Eurasia.