Following multiple, unexpected, terror attacks committed by mainstream Israeli-Arabs, some ethnic tensions are rising inside Israel. Some cities are distancing Israeli-Arabs from Jewish schoolchildren. The cities of Tel Aviv, Ness Tziona and Givatayim on Sunday joined the list of Israeli cities which have decided to block Arab employees from entering schools during school hours, for security reasons. According to Israel Radio, the mayors of Rehovot and Hod Hasharon last week prevented maintenance and cleaning Arab employees from doing their work during school hours due to the security situation and pressure from parents’ organizations.

The Givatayim municipality has stopped maintenance work at one of the city’s schools, and has demanded that contracting companies employing cleaning workers replace employees coming from East Jerusalem, reports Haaretz . According trade union representatives “such instructions from the local authorities are clearly illegal and contravene the attorney general’s instructions of 1985, the Equal Employment Opportunity Law, and a series of laws forbidding racial discrimination.”

If business in general seems to be suffering the consequences of the public’s fear, the Arab sector’s businesses are experiencing a virtual crash, with some registering a 80-90 percent decline in clientele and income. According YNet this is especially true in towns with mixed Arab-Jewish populations. Sources in the association of renovation contractors claim that most Palestinians who are employed by their members haven’t been coming to work these days, and the same goes for a large portion of the Israeli Arab workers. They claim that the reason for this is a fear of the Israeli clients. “Many contractors spoke with us, saying they were at the checkpoints in order to take workers through, but they were almost empty,“ they say. According to association figures, 80 percent of the 37,000 Palestinian workers in the field were absent at the start of the week. Other sources in the renovations field claimed that while the phenomenon exists, the figures are significantly exaggerated. “Renovation contractors are faced with many customers’ demands that they not let Arabs into their apartment,” they say, “It’s especially true for apartments in which the people continue to live while they’re being renovated.”(Source: YNet )

Nazareth is the largest city in the North District of Israel and it is known as “the Arab capital of Israel”. The population is made up predominantly of Arab citizens of Israel, almost all of whom are either Muslim or Christian. Jewish Press reports that Nazareth Mayor Ali Salem is still furious. “Every Saturday we get our 20 thousand guests—Jews, tourists and Israelis from across the country, this Saturday [17th Oct. 2015] we barely reached 1,000 people from out of town.” However Salem prefers to maintain his optimism. “For three days we had complete quiet, no politicians arrived and they didn’t riot or strike or demonstrate. Therefore I believe, as early as next Saturday, if the quiet will be maintained, everyone will return. Businessmen I spoke to today were pleased, not because no one visited them for a month, but because they manage to rebuild the ruins they (the politicians) left us in the city… Everyone knows that if the quiet continues, everything will fall into place. We are built to absorb every Saturday 20 thousand and sometimes 30 and even 50 thousand, just come, Jews, Arabs and Christians.” 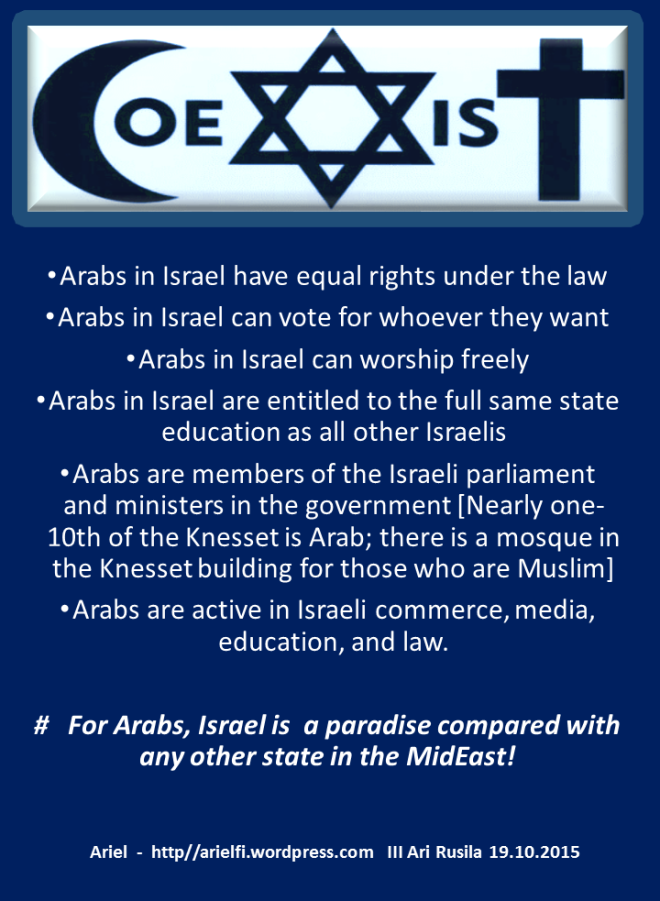 On the other hand some 1500 of Israeli Jews and Arabs gathered in Jerusalem on Saturday night [17th – 18th Oct. 2015], calling for an end to the weeks of violence and a resumption of peace negotiations between Israeli and Palestinian leaders. Also, according The Times of Israel , in Beersheba, about 150 Arab and Jewish activists gathered to form a human chain in support of peace.

Jewish Press reports that MK Dov Hanin (Joint Arab List) demanded that the Knesset Interior Committee hold an emergency session. According to MK Hanin, under the guise of anxiety some are promoting dangerous moves of racial segregation. MK Issawi Frej (Meretz) said that the education system, instead of acting to calm the situation is spearheading the creation of discrimination and exclusion. Last November, Ashkelon Mayor Itamar Shimoni faced nation-wide criticism when he decided, following sporadic Arab attacks on Jews in his city, to bar Arab employees from doing construction work in three kindergartens in the city during school hours. At the time, the Interior Ministry ordered the mayor to rescind his order.

Related to schools but more outside threads the Israel Defence Force (IDF) is making preparations on the border between Israel and Gaza Strip. The worst scenario is that suddenly, dozens of terrorists emerge from of a terror tunnel dug right next to the school. The terrorists take over the school and capture all of the students, holding them hostage. Recently, the Southern Gaza Regional Brigade, along with soldiers of the Paratroopers Reconnaissance Battalion drilled their rescuing skills to prepare for such a situation. (Source: IDF )

The current wave of violence rocking Israel has nothing to do with West Bank settlement building, Israel’s Ambassador to the US Ron Dermer said Saturday night [17th Oct. 2015], taking a veiled jab at US Secretary of State John Kerry, who recently linked the two. “The powder keg that this match ignited is decades of incitement by Palestinian leaders against Israel,” he argued. “Since Oslo, the Palestinian leadership has been poisoning an entire generation to hate Israel and hate Jews… A generation of Palestinians have grown up in a society that glorifies the murder of Jews.”

At UN Israel’s new Ambassador Danny Danon accused Abbas and the Palestinian leadership of “brainwashing children with incitement and hate.” As example he gave an instruction guide of ‘How to Stab a Jew’ and cause the most damage.