A former Bosnian Serb leader Radovan Karadzic was found guilty of genocide and other charges for his role during the Bosnian war in the 1990s, including the massacres of 8,000 Muslim men and boys outside the Srebrenica enclave.

An international tribunal announced a long-awaited reckoning in Europe’s bloodiest chapter since World War II on 24th March 2016. Karadzic, 70, was sentenced to 40 years in prison by the International Criminal Tribunal for the Former Yugoslavia (ICTY).

In my post “Srebrenica again – Hoax or Massacre?” I tried to highlight the other side of Srebrenica story which differs from the picture of (western) mainstream media. I have never denied that brutalities happened in Srebrenica, but would like to get more information

a) About the context of Srebrenica events

b) Who was massacred (civilians/soldiers/members of different ethnic groups)

c) How many died in Srebrenica July 1995

What I claimed then and now is that the reality is much more complex than the existing myth. To have wider picture about events I have picked some alternative versions about Srebrenica case and mostly from western sources because many readers would see Serbian versions too biased.

Evidence given at The Hague war crimes tribunal casts serious doubt on the figure of “up to” 8,000 Bosnian Muslims massacred. That figure includes “up to” 5,000 who have been classified as missing. More than 2,000 bodies have been recovered in and around Srebrenica, and they include victims of the three years of intense fighting in the area. The math just doesn’t support the scale of 8,000 killed.

Former chief NSA analyst: Most of killed in Srebrenica were soldiers who refused to surrender:

“The Politics of the Srebrenica Massacre” -article argues that only some Bosniaks were executed, most died in battle, and some of the bodies in mass graves are actually Serbs, by Edward S. Herman, 7 July 2005

There have been a great many bodies gathered at Tuzla, some 7,500 or more, many in poor condition or parts only, their collection and handling incompatible with professional forensic standards, their provenance unclear and link to the July 1995 events in Srebrenica unproven and often unlikely, (The web site of the International Commission on Missing Persons in the Former Yugoslavia acknowledges that the bodies “have been exhumed from various gravesites in northeast HiH,” not just in the Srebrenica region; quoted in a 2003 Statement by ICMP Chief of Staff Concerning Persons Reported Missing from Srebrenica in July 1995, Gordon Bacon.) and the manner of their death usually uncertain. Interestingly, although the Serbs were regularly accused of trying to hide bodies, there has never been any suggestion that the Bosnian Muslims, long in charge of the body search, might shift bodies around and otherwise manipulate evidence, despite their substantial record of dissembling. A systematic attempt to use DNA to trace connections to Srebrenica is underway, but entails many problems, apart from that of the integrity of the material studied and process of investigation, and will not resolve the question of differentiating executions from deaths in combat. There are also lists of missing, but these lists are badly flawed, with duplications, individuals listed who had died before July 1995, who fled to avoid BSA service, or who registered to vote in 1997, and they include individuals who died in battle or reached safety or were captured and assumed a new existence elsewhere.

Report of International Strategic Studies Association (ISSA) says that the “alleged casualty number of 7,000 victims is vastly inflated and unsupported by evidence”

Phillip Corwin, former UN Civilian Affairs Coordinator in Bosnia during the 1990s, said: “What happened in Srebrenica was not a single large massacre of Muslims by Serbs, but rather a series of very bloody attacks and counterattacks over a three year period which reached a crescendo in July of 1995.”

Former BBC journalist Jonathan Rooper, who has researched the events in Srebrenica since 1995, says that the region was a graveyard for Serbs as well as Muslims and that a monument to inflated casualties on one side “serves neither truth nor the goal of reconciliation”. Around 3,000 names on a list of Srebrenica victims compiled by the Red Cross matched voters in the Bosnian election in 1996. “I pointed out to the OSCE that there had either been massive election fraud or almost half the people on the ICRC missing list were still alive,” says Rooper. “The OSCE finally responded that the voting lists had been locked away in warehouses and it would not be possible for them to investigate.”

Report of Srebrenica Research Group concludes that “the contention that as many as 8,000 Muslims were killed has no basis in available evidence and is essentially a political construct.

The ICMP now (June 2005) states on its website: “One month before the 10th anniversary of the fall of Srebrenica in 1995, the International Commission on Missing Persons (ICMP) has completed identifications of more than 2,000 of the Srebrenica victims.”

In short, Srebrenica, whose Serb population had been chased out by Muslim troops at the start of the civil war in 1992, was both a gathering point for civilian Muslim refugees and a Muslim army base. The enclave lived from international humanitarian aid. The Muslim military did not allow civilians to leave, since their presence was what ensured the arrival of humanitarian aid provisions which the military controlled… 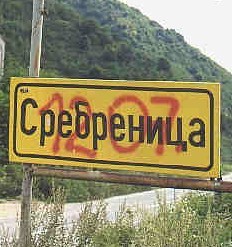 Much has been made of the fact that Serb forces separated the population, providing buses for women, children and the infirm to take them to Tuzla, while detaining the men. In light of all that preceded, the reason for this separation is obvious: the Bosnian Serbs were looking for the perpetrators of raids on Serb villages, in order to take revenge…

When the Serb forces entered the town from the south, thousands of Muslim soldiers, in disarray because of the absence of commanding officers, fled northwards, through wild wooded hills toward Tuzla. It is clear enough that they fled because they feared exactly what everyone aware of the situation dreaded: that Serb soldiers would take vengeance on the men they considered guilty of murdering Serb civilians and prisoners. Thousands of those men did in fact reach Tuzla, and were quietly redeployed. This was confirmed by international observers. However, Muslim authorities never provided information about these men, preferring to let them be counted among the missing, that is, among the massacred. Another large, unspecified number of these men were ambushed and killed as they fled in scenes of terrible panic. This was, then, a “massacre”, such as occurs in war when fleeing troops are ambushed by superior forces.

Who Gets Justice From ICTY?

In my earlier article I asked: Srebrenica – a hoax or massacre? and summarized following:

Srebrenica – a hoax or massacre?I would say both; a hoax due the well planned and implemented PR maneuver , a massacre when the Serbs went to trap and used brutal force also against civilians. When the Serbs got a tactical win in warfare the Muslims got US as their strategic ally with Serb demonization. In addition to human sacrifice – victims from all ethnic groups, civilians and soldiers/mercenaries – one loser was the investigative journalism and media on the whole by accepting one-sided truth in Bosnia and since then also in future conflicts.

In Wilson Center publication 191. Biased Justice: “Humanrightsism” and the International Criminal Tribunal for the Former Yugoslavia Robert M. Hayden gives from my piint of view an excellent description about ICTY – a quote:

The ICTY, however, delivers a “justice” that is biased, with prosecutorial decisions based on the personal and national characteristics of the accused rather than on what available evidence indicates that he has done. This bias is seen in the failure to prosecute NATO personnel for acts that are comparable to those of people already indicted, and in the failure to prosecute NATO personnel for prima facie war crimes. This pattern of politically driven prosecution is accompanied by the use of the Tribunal as a tool for those Western countries that support it, and especially the United States, to pursue political goals in the Balkans. Further, the Tribunal’s rules (some of which resemble those of the Spanish Inquisition) and procedural decisions make it difficult for defendants to receive a fair trial.

From its part international tribunal whitewashes the activities of Western powers and their Muslim allies during Bosnian war as well during Kosovo conflict [1999]. While focusing to Karadzic and later Karadzic’s military chief, Gen. Ratko Mladic [still awaiting trial] ICTY ignores ethnic-cleansing policies and atrocities made by Croatian and Bosnian nationalists as well Kosovo Albanian crime clans because they all were US allies.

In my opinion the decision of ICTY reflects more old realpolitik than justice. Hopefully, the Mladi? trial will seriously examine the entire context that led to the massacre of Srebrenica and how a vulgar “tit-for-tat” between two armies was transformed by rhetoric into genocide. 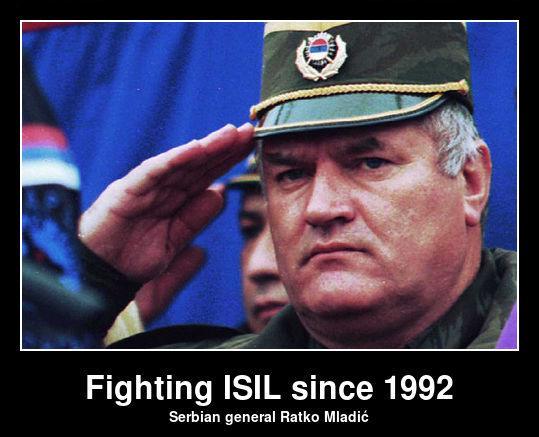