Gaza’s tunnel war continues on all fronts – on Egypt-Gaza border, on Israel-Gaza border and on home front. While Egyptian
army flooded again a Hamas tunnel, the Israel army discovered the first terror tunnel inside Israeli territory since the end of the war in the Gaza Strip in the summer of 2014. 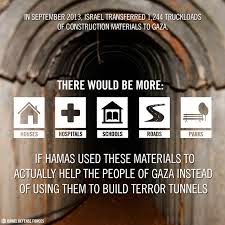 Hamas says its smuggling and terror tunnel network is twice as large as the Viet Cong’s was at the height of the Vietnam War. On home front Hamas smuggles in cement, diverts from construction and humanitarian donations, and even raids civilian construction sites in order to rebuild its tunnels.

Palestinian media reported Monday morning [18th Apr. 2016] that the Egyptian army flooded a Hamas tunnel in the southern part of Gaza Strip. Seven Hamas terrorists are missing. The tunnel flooded was a commercial tunnel, used by Hamas to smuggle commodities into Gaza Strip, and not a military tunnel. The collapse happened after the Egyptians performed another one of their routine flooding of the area with sea water – or some say with sewage.

Egypt, historically the Palestinians’ major backer, has brokered several truces between Israel and Gaza factions and tried to heal past rifts between rival Palestinian factions. But Egypt has intensified a blockade of Gaza by largely sealing the border since 2013. Egypt has destroyed and flooded hundreds of the tunnels as part of an ongoing security campaign in the northern Sinai Peninsula against anti-regime militants launching attacks on Egyptian police and military personnel. Recently Egypt accused Hamas of involvement in last year’s assassination of Public Prosecutor Hisham Barakat. (More in Hamas’ Relations With Egypt Worsened )

The tunnel flooded by Egypt appeared to have been a commercial tunnel used to smuggle people and goods in and out of the Strip, as opposed to the “terror tunnel” located in southern Israel, which could have been used to carry out attacks on Israeli civilians and soldiers.

It is the first such tunnel discovered inside Israeli territory since the end of the war in the Gaza Strip in the summer of 2014. During the Operation Protective Edge at least 34 tunnels were discovered and destroyed by Israeli forces. The tunnel was located approximately 100 feet (30 to 40 meters) below ground and extended “tens of meters into Israel,” IDF spokesperson Lt. Col. Peter Lerner said. It was discovered close to the border fence, he added. Though the tunnel was found just over one week ago, news of its discovery was forbidden from publication by the military censor. [Source: The Times of Israel ]

The newer tunnels, as now discovered one, built after Operation Protective Edge benefit from sturdier construction methods, improving structural integrity, which make them less likely to collapse due to rainfall. The wall of the tunnels discovered during Operation Protective Edge consisted of pre-cast concrete slabs placed vertically, with reinforced concrete arches above them to prevent the tunnel from collapsing due to the weight of the soil above it. In this type of construction, the wide vertical slabs are the weak point, and that is why Hamas is now building its tunnels using long, narrow concrete slabs laid horizontally, one on top of the other, within a metal frame. This structure is much stronger and more durable. It can withstand not only the pressure from the soil overhead, but also explosions and fighting inside the tunnel. It also allows for safer working conditions on rainy days when water seeps into the work area. Too much rainfall could cause the soil above a tunnel built using the pre-Protective Edge method to collapse, as seen several times in recent months. The new structure makes it far less likely that the tunnel would collapse. [Source and more in Ynet ]

Israel has started testing a secret new weapon for defeating the tunnel systems which the Palestinian Hamas and Hizballah are busy digging for surprise attacks against Israel. Now, according to Foreign Policy magazine, it appears Israel has found that solution. Western sources reported on 11th March 2016, that the new weapon, dubbed the “Underground Iron Dome,” can detect a tunnel, then send in a moving missile ton blow it up.

Hamas officials are convinced Israel has developed new technology to detect the tunnels, and that it feeds the relevant data to the Egyptians. However, some Palestinian outlets claimed the true source of Israel’s tunnel discovery was not a technological breakthrough but rather one man: Mahmoud Jasser Awad Atawna who had been an active member of Hamas’s tunnel operations until he fell into the hands of Israeli forces a few weeks ago.

Gazans have been using tunnels regularly since the mid-1990s, when they were dug under the Gaza-Egypt border in Rafah for smuggling purposes. By 2001, and again in 2004-2005, Hamas terrorists used tunnels to plant explosives under IDF installations. In 2006, Hamas dug a tunnel into Israel near Kibbutz Kerem Shalom, ambushed a tank unit, kidnapped Corporal Gilad Shalit—who would be held in captivity for five years—and killed two of his fellow soldiers. By 2009’s Operation Cast Lead, Hamas’ use of tunnels had evolved into a clear threat. In 2012’s Operation Pillar of Defense, the IDF targeted the tunnels as much as it did Hamas’ rocket capabilities. In 2013, a large tunnel was discovered that led to an Israeli town. It was clearly intended for a large-scale terrorist attack. An even bigger tunnel was discovered later that year.

During Protective Edge, a major tunnel infiltration aimed at the residents of a kibbutz near the Gaza border was thwarted just as terrorists were emerging on the Israeli side. Four more such attacks would be interdicted, some with the Hamas fighters having already crossed into Israel. One attack was successful; five Israeli soldiers were killed. During Operation Protective Edge at least 34 tunnels were discovered and destroyed by Israeli forces. Hamas even used a tunnel to try to kidnap a soldier after a ceasefire had come into effect. The tunnel extended for over a mile, some of it deep into Israeli territory

The original tunnels on Egypt-Gaza border were and still are used to smuggle arms and commercial goods from Egypt to Gaza. Hamas substantially expanded this infrastructure after 2007 and Israel’s imposition of a sc, blockade. At the time, it is estimated that there were as many as 2,500 such tunnels running between Gaza and Egypt in the area of Rafah. There are estimates that as much as $3 billion in goods were moved annually from Sinai into Gaza.

A second type of tunnel is the tactical or “defensive” variety. These are meant to assist Hamas in its next war if Israel sends in ground troops. They form a subterranean web underneath Gaza, and give fighters and commanders freedom of movement, allowing them to evade capture, hide from aerial assault, and maintain the element of surprise. Rockets, launchers, and ammunition are also stored in these tunnels, so Hamas can continue firing even while under aerial attack. Hamas commanders are said to have personal tunnels for themselves and their families.

It is the third type of tunnel, however, which is most worrying—the terror tunnels. Given Israel’s security fence and buffer zone on the border, Hamas was left with essentially two options for launching attacks on Israel—going over the fence, via rockets and mortars, or going under it. And since Israel’s anti-missile capabilities have advanced to the point where the rocket threat is largely neutralized, Hamas shifted its investments underground.

The human intelligence capabilities and other covert efforts in Gaza are the key element to detect tunnel entrances. Hamas too is aware of this and reportedly executed dozens of tunnel diggers in the past to prevent them from leaking information to Israel.

There is one aspect with Hamas’ tunnel strategy related to Gazans daily life and wellbeing. Roughly 9,000 homes were destroyed during Protective Edge, and very few have been rebuilt. According to declassified intelligence reports, these supplies are routinely stolen by Hamas in order to serve the group’s terrorist purposes. Hamas smuggles in cement, diverts from construction and humanitarian donations, and even raids civilian construction sites in order to rebuild its tunnels.

[This article first appeared in Conflicts By Ari Rusila ]